Bangkok is fascinating but challenging, especially for those seeking exercise.  This trail follows a path along a khlong (canal) which forms an extended and quiet oasis through about 10.5km of this frantic and congested city.  The Khlong Saen Saep is well known for its passenger boat service.  Long,  low, fast, overcrowded, smoking boats go to and from Wat Sri Boon Rueng in the NE suburbs to Wat Sakhet in the center.

Our trail starts at the NE boat terminus.  This can be reached from Ramkhamhaeng Road, taking an alley (Ramkhamhaeng 107) north to the Wat and Khlong, just before Amway.    It can also be reached from the North, from Route 3278 using the footbridge leading from Sukhaphiban 2.  The trail goes SW and then W for 10.49km along a good concrete track on the southern,  shadier bank, with occasional bridges which need to be ducked over,  under or round.  The trail comes to an abrupt collapsed end at a green iron footbridge 300m after the Soi Phetchaburi 38/1 bridge crosses the khlong, just west of Italthai Tower.  The footbridge over the khlong connects north to an alley which meets Phetchaburi Road 750m west of Asoke and Phetchaburi Metro stations.

The trail passes the walls and gardens of grand houses, as well as simpler dwellings, fruit and vegetable allotments, modern apartments and alternating Wats and Mosques.  At the boat stops, the street food vendors ply their fragrant trade.  The city's renowned street artists have enlivened the walls, with a profusion of blooming flowers and trees.  Regular passing boats can dampen the track, making a few slippery bits, especially as you duck under bridge approaches.  Navigation is straightforward, with the only intersection being where the khlong meets Khlong Tan after 7km, requiring a crossing on a colorful footbridge.    For some,  the increase in altitude by 10m is a modest positive, so the trail can equally be done in the other direction, which may be logistically easier.

The trail is named after our friend Danyel, who spent many an early weekend morning exploring the klong, but sadly had to leave Bangkok before it was registered with FKT.

There are a number of websites featuring the boat service - e.g. https://www.tripadvisor.com/Attraction_Review-g293916-d1864081-Reviews-Khlong_Saen_Saep-Bangkok.html 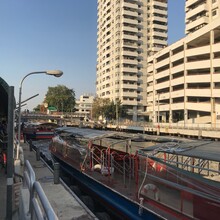 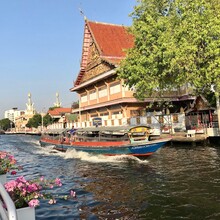 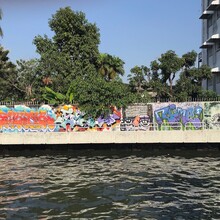 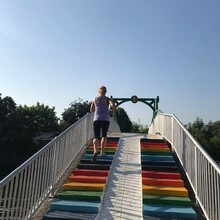 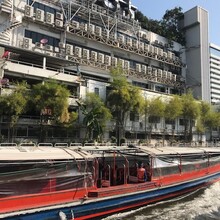 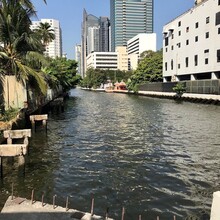