Fårö is a small island just north of Gotland.

The island is known for its beaches and "rauks" along the coastline.

Main goal with the route is to run around the whole island of Fårö.

For the most part you will be able to have the coastline on your right (or left side depending on the direction you start in). Some areas along the coast are private property and there you need to diverge from the path.

During 15 March to 15 July some parts on the route (Ryssnäs and Norsholmen) will be closed of due to bird protection area. So to be able to run along the whole island it is best to do that after 15 July.

This route is usually run as a two part trip, hosted by Gotland Trail Runners.

Description of the route

First when you arrive with the ferry from Fårösund take a right turn so that you always have the ocean to your right.

The first kilometers is on gravelroad and will take you to the natural reserve of Ryssnäs. There is a clear path/trail where you follow the coastline through the reserve. When you have passed through the reserve you will arrive to a road that you follow for around 500 meters, then you continue on a trail so that you have the coastline on your right. Keep on following the trail that runs along the coastline until around 16km where you need to follow the asphalt road less then 1 kilometer before turning down to the coastline again. This is because some parts along the coastline are private property. Keep following the paths along the coastline until you reach the beach (Sudersand), this beach is almost 4km. Keep running along the beach until it ends and continue on the trail that is available when the beach ends. The path ahead will now consist of trails and beaches until you arrive at the Fårö Lighthouse at around 35 kilometers. From here on there will be almost 4 kilometers of beach to run on. Around halfways through the route there will be some running on road/rails until you arrive at Norsholmen a cape that consists mostly of stony terrain. This area is also very crowded with birds. On the cape just following the coastline, the terrain here can be a bit hard to run on due to the shoreline consist of small stones. At the end of the cape you can see the wreckage of the ship Fortuna. When you have run along the cape you will end up on a gravel road that will continue to follow the coastline. You will now enter the second cape on northern Fårö, Langhammershammaren. First when you enter the cape you will follow a path that seems to diverge from the coast but it will turn to the direction of the coast after a while and you will start to see the ocean on your right again. This cape will also consist of very stony terrain which can make it quite difficult to run on. From here on it is rather easy to run alongside the coast. After you have run along the cape of langhammershammaren you will reach the famous "Digerhuvud" this area is full of "rauks" (stone fossils). Here there also exists a road that runs alongside the coast making it a bit easier to run. After the area with the rauks you will end up on an asphalt road (road 1701) and need to follow this for around 3 kilometers. This due to private property along the coastline in this area. At the end of the road you will reach "Jauvika fiskeläge", here you will be able to follow trails along the coast. You will reach another nature reserve (Marpes) along the way, the reserve will have multiple trails to choose on but if you keep to the right and follow the coast you will choose the correct one. When you exit the reserve it is best to follow the bigger roads all the way to the ferry. You will diverge a little from the coast but here there is no clear path to run along the coast. During my run I tried to run near the coast but ended up in a forest with no trails and needed to climb over some fences, not recommended. I would say to keep to the bigger parts and still make sure that the ocean is on your right. The last kilometers you will run on the main road on fårö. Be careful due to the traffic and at the goal there is a small cafe where you can buy some refreshments. 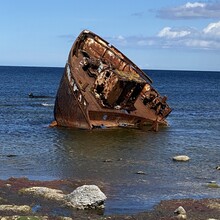 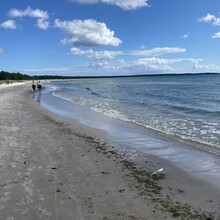 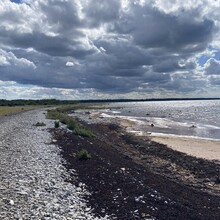 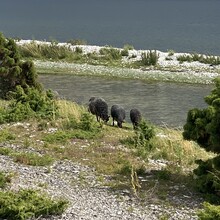 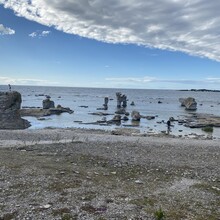 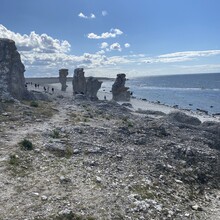