The crossing of the south fork of the American is at the (“new”) Salmon Falls bridge. The crossing of the north fork can be done by fording the river anywhere upstream of Oregon Bar, which is the northern extent of Folsom Lake when full. As of 2020, the Auburn SRA General Plan includes plans for a future bridge near this location or at China Bar.

The route is almost entirely on unpaved surfaces, with exception to the necessary use of roadways through the Folsom Dam/Folsom Lake Crossing. As a loop route, it can be completed in either direction from any starting point. The only location where you need to leave the FLSRA boundary is for the Folsom Lake Crossing bridge behind the main dam (1.3 mi). With this exception, if a runner departs the FLSRA boundary or one of the primary trails noted above for resupply, water, or amenities, they should return to the same location of departure prior to continuing.

As of 2020, there is no developed trail along the north fork eastern shoreline (about 14-16 miles). However, plans to construct a trail along this shoreline are included in both the FLSRA and Auburn SRA General Plans. Until such time, travel along this segment between Oregon Bar and Wild Goose Flat (8.5 mi) may be just under the high water line (elev: 466’) where vegetation is limited, so long as the runner stays above ~450’ elevation (omitting cutoffs exposed when the lake level is low). Between Wild Goose Flat and the Peninsula, the route uses the old Goose Flat Trail, which is very overgrown/obscured as of 2020. Future attempts on this route after construction of a developed trail along the north fork eastern shoreline will have an advantage over today’s condition. 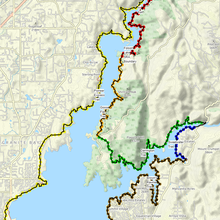