The route is not an 'official' route and so there are no distinctive way markers for the route, the only real way mark is to keep to the coast line with the water on your right or left depending on which direction, clockwise or anticlockwise you go. The terrain is part tarmac but mostly rocky and sandy beaches with a few open land trails. It is essential that the water tide times are taken into account when doing this route as some sections are not passable without low tide, I have put a further more detailed description of my attempt below.

Isle of Bute is small island off the west coast of Scotland in the UK. There are two points to cross to the island from the main land the main crossing being from Wemyss Bay the other from a place called Colintraive.

Bute lies in the Firth of Clyde. The only town on the island, Rothesay, is linked by ferry to the mainland. To its north is the coastal village of Port Bannatyne:

The interior of the island is hilly, though not mountainous, with conifer plantations and some uncultivated land, particularly in the north. The highest point is Windy Hill at 278 metres (912 ft). The centre of the island contains most of the cultivated land, while the island's most rugged terrain is found in the far south around Glen Callum.

The western side of Bute is known for its beaches, many of which enjoy fine views over the Sound of Bute towards Arran.Hamlets on the western side of the island include Straad, around St. Ninian's Bay, and Kildavanan on Ettrick Bay.

The northern part of the island is more sparsely populated, and the ferry terminal at Rhubodach connects the island to the mainland at Colintraive by the smaller of the island's two ferries. The crossing is one of the shortest, less than 300 metres (330 yd), and takes only a few minutes but is busy because many tourists prefer the scenic route to the island.

The island was also known during the Viking era as Rothesay, possibly referring to the personal name Roth or Roderick and the Old Norse. This name was eventually taken by the main town on the island, whose Gaelic name is Baile Bhòid ("town of Bute").

For the purpose of description I was describe the route as I completed it.

I started at the small Hamlet called Kerrycroy which lays on the east coast next to Mount Stuart. I observed the tide times via the https://www.tidetime.org/europe/united-kingdom/isle-of-bute.htm  the evening before as the north coast line at Rhubodach is nearly impossible to pass without low tide.

From Kerrycroy I ran in an anticlockwise direction, part on the small country road for about a mile untill you reach the pathway and then continue on the path all the way into the main town of Rothesay. There are plenty of shops and small supermarkets in Rothesay should you need to stock up, I had already stocked up and so didn't need to stop. You continue on the pathway along the promenade past the town keep going past the sailing club to a a place called prospect house, this is about 1.5 miles from Rothesay where there is a fork in the path, follow the shore line pathway around the point of Ardbeg and continue on to Port Bannantyne.

At Port Bannantyne you continue on the pathway along the promenade past a green park and to as sign that say Rhubodach - Ettrick Bay, Continue on the path towards Rhubodach. At about 1 mile after the sign you will follow the road going left up towards the farm and not along the shore line to the boat yard. Once past the farm stick to the country road all the way to Rhubodach.

Distance from Kerrycroy to Rhubodach which is the tarmac section is roughly 12 miles.

At the ferry terminal at Rhubodach continue past where the boat docks and follow the path round slightly to the left where you will see the gate and sign with map of the island. From this point head through the and follow the beach / coast line around the north end of the island to Kilmichael cottage where you can join onto a farm track which leads to the country road taking you to Ettrick Bay.  Care should be taken around the north end coast as it is dangerous and if the tide is not timed correctly then it will not be passable . There is the possible route of going up and onto the hills at this point but it would need to be explored.

At Ettrick Bay there is a little cafe that serves hot and cold food and drinks, there is a nice sandy beach here which you will follow all the way around to St Ninians Bay. I followed the the coast line which is flat all the way back round to where I started at Kerrycroy. After St Ninians Bay is Scalpsie Bay then Stavanan Bay, at Stravanan Bay you may see way marks for the local route called West Island Way ignore these and continue on to Dunagoil Bay and round the rugged coast to the light house at Glencallum Bay.

From the light house there is a well trodden path which is part of the West Island Way, this is followed into and through the village of Kilchattan Bay untill you reach the beach where it goes left and you go right along the beach. Follow the beach line round past Bruchag Point and Kerrylamont Bay, there is a little boat house at Mount Stuart where you can join onto a forest path that runs parallel with the beach this path takes you all the way to Kerrycroy Village. 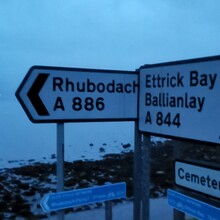 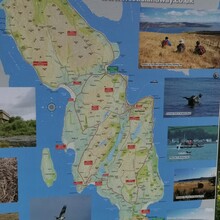 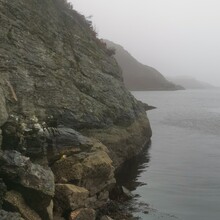 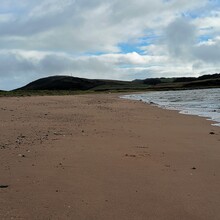 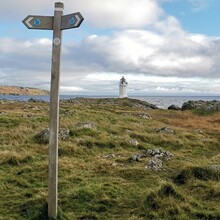 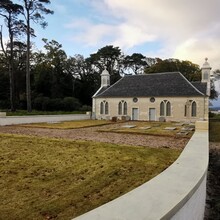 Thank you so much for publishing this, I hope that other people enjoy it as much as I did. 👍🏼