On the occasion of the 25th anniversary of the Lake Constance district, located on the northern shore of Lake Constance, the jubilee trail was established in 1998.  While the streams of tourism are mainly concentrated in the villages along the shoreline, the trail, which is about 114 km long in total, leads in six stages mainly through the backyard of the district. This gives the hiker an opportunity to experience the picturesque landscape of the Lake Constance District off the highly frequented tourist tracks. The trail can be hiked in the individual daily stages or in several combined stages. Also because of the great popularity of the trail, it is not unlikely that the route will continue to attract the attention of runners and hikers in the future as a "Fastest-Known-Time Route".

Rainer Barth, a knowledgeable mountaineer and hiker, has been living in the Friedrichshafen area since 1978. As the initiator of this trail, he has chosen and determined this enchanting route. Rainer Barth also wrote the book "Jubiläumsweg Bodenseekreis. Von Kressbronn to Überlingen, der Bodenseekreis in sechs Etappen” which was published in its 3rd edition in 2016. This book describes the jubilee trail in detail.

From the book title it is already clear that the initiator of the path has planned the start in Kressbronn and the finish in Überlingen. The path can also be run in the opposite direction. The signposting is basically available for both directions. The signposts of the trail bear the inscription "Jubiläumsweg Bodenseekreis" and are illustrated with the district’s coat of arms. Even if the signposting in statu nascendi was continuous and complete, in practical use one should always assume that one or the other sign is lost due to tree-felling or clearing works. Even because of dense vegetation in summer and autumn, it is easy for runners to overlook one or the other sign. For safe navigation, it is therefore recommended to take a GPS device with a previously loaded track.

The trail crosses the diverse landscape types of the Lake Constance District (Bodenseekreis). On each stage it passes at least two particularly beautiful viewpoints, which offer a view of the lake and the Alps. It also passes some less known and often unnoticed art historical sites.

A leaflet from the German Bodensee-Tourismus GmbH clearly describes the route: https://www.bodenseekreis.de/fileadmin/05_landkreis_tourismus/wandern/Jubilaeumswanderung_490x420_ANSICHT_280518_2.pdf

The route is also described in Wikipedia https://de.wikipedia.org/wiki/Jubil%C3%A4umsweg_Bodenseekreis.

In the following, the route will briefly be described in its six stages, each of which has a distance of between 17 and 20 kilometers.

The first stage leads from Überlingen to Owingen. From Überlingen you climb high above the Überlingen Lake and can enjoy a wide panorama from the Haldenhof viewpoint. On a clear day, the Alpstein mountains with the prominent Mount Säntis (2,502 m) are very clearly visible. On the north side of the Sipplinger Berg you walk down to Nesselwangen, from where you reach Owingen through forests and open fields.

The second stage leads from Owingen to Heiligenberg. From Owingen you first go to Hohenbodman. A detour to the lookout tower there, is highly recommended because of the phenomenal view on clear days. Afterwards, the route leads through the Aachtobel, a narrow and wild forest gorge. At the end of our technically not easy way through the Aachtobel you will find the pilgrimage chapel "Maria im Stein" (Mary in the Stone). After a short prayer (hey, many of us here are Catholics), we continue through orchards to Heiligenberg, where the stage ends on the Schlossplatz (Palace Square). The Rennaissance Palace is worth having a look at.

On the third stage the way leads from Heiligenberg to Markdorf. Also on this stage ascents and descents alternate. After the steep demolition of the Gehrenberg slide you pass the Gehrenberg tower. The ascent to this 30-meter high vantage point is worthwhile because of the excellent view over Lake Constance and to the nearby Alps. The stage, which ends in Markdorf, is characterized by magnificent trails through light forests, open fields and picturesque villages.

The fourth section leads from Markdorf to Meckenbeuren. After leaving Markdorf behind, the route leads over the Hepbach-Leimbacher Ried, through the Rotach valley and then over open cultivated land through the Brochenzell forest to Meckenbeuren. A beautiful vantage point on this stage is the Ailinger Haldenberg with its picturesque chapel. Visit this place, and you will be rewarded with another breathtaking view over Lake Constance and to the Alps.

At the beginning of the fifth stage, coming from Meckenbeuren, you cross the expanse of the Schussenbecken (valley of the river Schussen). The landscape then becomes a little more winding, the path leads over hilly trails to the Brünnensweiler Höhe, a wonderful vantage point. Passing the picturesque Jägerweiher (hunter's pond) and the idyllically situated Holzweiher (wood pond), the trail leads to Neukirch, the destination of this section.

At the beginning of the sixth and last stage, you leave Neukirch and the border area to the Vorallgäu and walk past the picturesque Kreuzweiher (cross pond) into the valley of the Argen, which flows into Lake Constance at Kressbronn. Through woodland, you pass Schleinsee (Schlein pond) and the fruit plantations high above Kressbronn. The descent to Kressbronn and the run to the train station there form the end of a wonderful scenic adventure trail through the backyard of the entire Lake Constance district.

The gpx-file attached is my own. I cleared it from all the numerous deviations I (unintentionally ;-)) made during my recording of the route. Although the "official" length of the trails is 111 km, I measured 114 km. 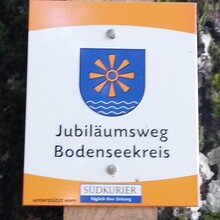 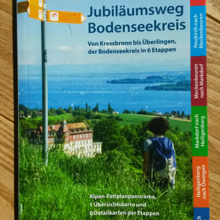 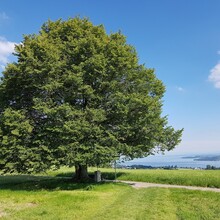 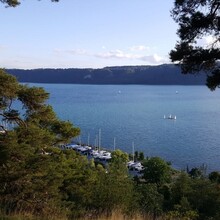 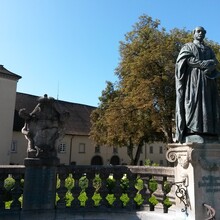 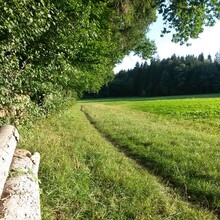