This route starts at a parking lot directly across from Doubletop Mountain. It uses the Marston, Mt. Coe and South Brother Trails. The path from the trailhead leads gently up and down through lowlands, crossing a sandy, shallow stream before bearing right. The footing is excellent, with mainly packed dirt and a smattering of roots and rocks. At the T intersection bear right, as the trail winds through hardwoods, eventually falling alongside a brook, which it crosses a few times. Fine water sources and waterfalls make the trail even prettier, as one starts to climb steadily. The trail then flattens out a bit at the foot of a valley. The route next starts to climb steadily up through a narrow path and then into a wide gully, with exposed rocks and old slides. Follow the trail through this until you get to the bottom of the Coe Slide. This impressive open slab face bares witness to many previous slides, as the bottom is strewn with rocks. The trail moves between the brush on the right and left sides of the wood slab face. In wet weather this section is slippery. Finding footholds among the spotty brush and loose rock allow you to make your way to the top of the slide. Before gaining the dirt path again, you need to traverse a slab ledge then scramble up a small rock cleft. Eventually the trail enters a steep, muddy and wooded section of birch and softwood, before turning right and emerging at the small exposed Mt. Coe Summit. The top offers fine views of The Hunt Trail ridge and the backside of Katahdin. Leaving the Coe summit, you dart down the narrow path between exposed rock outcrops and stunted shrub. The path, still excellent footing, drops into a gentle wooded saddle, offering great running. One traverses the thick woodland between Coe and South Brother Mountain, passing along the western shoulder of South Brother. A short side trail takes you up a boulder scramble to the exposed and flat S. Brother summit, before turning around and back to the Marston Trail. Here the trail continues its traverse of the western slopes of The Brothers, through mixed woods and along a fine path. Do the out and back to North Brother Mountain.  Once you are back at the N. Brother intersection turn left and the trail takes you downhill, gently at first, then winding steeply down toward a large pond. From here the trail turns south and flattens out somewhat. Eventually you get back to the first T intersection, and turn right for a short run back to the parking lot. 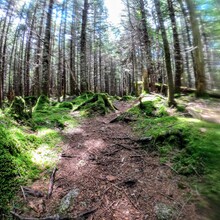 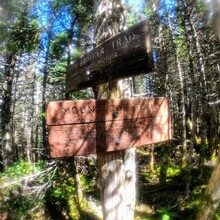 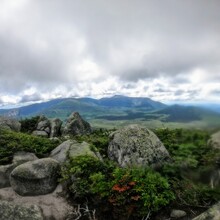 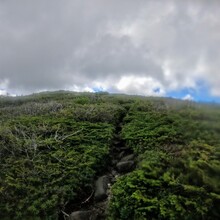 Can we get a route that includes N Brother? The standard loop includes all 4 peaks.

After Nigel's run I edited the route/gpx to include North Brother.