Mee & Knowles are two spectacular and remote canyons in the Black Ridge Canyons Wilderness of the McInnis Canyons National Conservation Area in western Colorado. If you like rugged desert landscape and don't want to see other people, this route is for you! Closing the loop requires around 38 miles of on- and off-trail hiking/running with somewhat tricky navigation. The route is described in Michael Kelsey's Canyon Hiking Guide to the Colorado Plateau.

There are 2 main trailheads for this route - Mee & Knowles. The Knowles TH is about 1.1 miles off of the actual loop, so starting there adds 2.2 miles to the trip. The Mee TH is on the loop, but the access road is probably worse and possibly 4WD.

Lisa Ledet, Stephanie Ehret, Buzz Burrell and Peter Bakwin ran the route from the Knowles TH on April 7, 2007, in 10h57m. This remains the women's FKT. Peter Bakwin returned solo on May 3, 2011, and ran the same route from the Knowles TH in 8h57m, as reported below (with GPS track). His time without the Knowles TH out & back was 8h32m. Giff Walters bested this time by 11 minutes, running 8h21m from the Mee TH on May 28, 2016, as reported below. Amazingly, Andrew Bentz independently ran the route on the very same day as Walters, closing the loop in a very speedy 7h21m!

Buzz had talked up this route for years. It has all the requirements: remoteness, difficult terrain, a little scrambling, tricky route finding, and of course the fact that nobody does this in a day. Buzz had done it a couple of times, but had never managed to get out before dark. Buzz, Lisa, Stephanie & I started at the Knowles trailhead at dawn on April 7, 2007. We ran down Knowles and up Mee. We were able to find sufficient ambient water in both canyons. Back up top, getting from upper Mee back to Knowles TH is somewhat tricky, as the area is a maze of ATV roads. Compass or GPS is helpful. -- Peter Bakwin 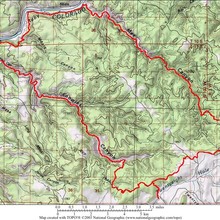 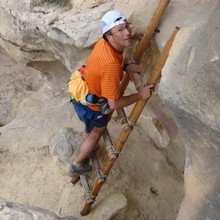 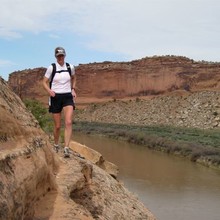 This route on the old FKT site
http://fastestknowntime.proboards.com/thread/17/mee-knowles-canyons