Nate Bender submitted the obvious (but definitely not easy!) challenge of climbing all peaks over 12,000' in Montana, all of which are located in the Beartooth Range:

The Beartooth 27 is the Montana state highpoint challenge and encompasses the 27 peaks in Montana taller than 12,000 feet. All 27 are in the Beartooth Range of south-central Montana, and the route stays entirely within the boundaries of the Absaroka-Beartooth Wilderness. Though there are more than 27 twelvers in the state, this list uses 100m (roughly 300 feet) of prominence as the criteria for inclusion, which has been the threshold in determining other state highpoint challenges and seems to be more or less the international standard.

The route is roughly 100 miles and 49,000 feet of vertical gain, though these numbers will obviously vary depending on the exact path a person takes in connecting the peaks. The vast majority of the route is off-trail; lots of scrambling on rocky ridgelines above treeline. There are lengthy sections of sustained class 3 and 4 scrambling, and possible sections of 5th-class depending on exact path chosen. Only about 5 miles of the total is on trail, which, combined with the fact that the route is entirely within the wilderness, makes for an aesthetic, rugged adventure.

The mountains naturally group into four clusters: starting from the north, the Pyramid group is the smallest and includes Pyramid, Wood, and Hague. Next is the Granite group, which includes Granite, West Granite, Cairn, Mystic, Glacier, Villard, the Villard Spire, Tempest, and Peal. Farther south is the Castle group, which includes Bowback, Sundance, Darlene, Snowbank, Castle, Point 12,540, Castle Rock, and Point 12,090. Last up is the Rearguard group, which includes Spirit, Beartooth, Forget-Me-Not, Whitetail, Silver Run, Sky Pilot, and Rearguard.

Two summit technicalities are worth noting. It has not been determined definitely which peak (East or West) of Mt. Wood is tallest. The USGS quad topo for the area labels the West summit as the true peak, so for lack of a better source that should be considered the summit. Also, there are two blocky towers on Mt. Rearguard, and both appear to be higher than the surrounding plateau. Of the two, the east tower appears to be higher, so this should be considered the true summit. 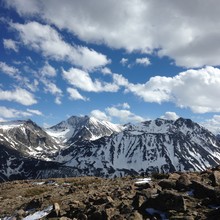 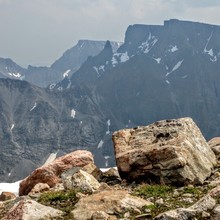 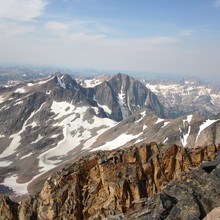 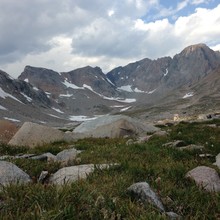 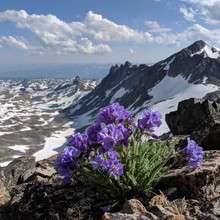 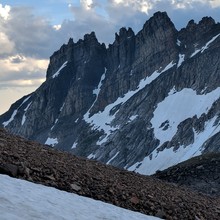 Nate Bender announced his intention to go for this FKT:

I'm setting off tomorrow morning [8/10/2018] to attempt the FKT. A handful of people have climbed all 27 peaks over a period of years, but to the best of my knowledge no one has yet linked all the peaks in a concerted speed attempt like I am attempting.

My attempt is in the supported style; I have friends and family hiking in to provide support, and also pacers along the way. I estimate the effort will take somewhere in the vicinity of four days.

I will be documenting the attempt through photos/video from myself, pacers and crew along the way. I will be carrying an InReach w/ live tracking, and also gps watches. My Suunto Ambit3 Peak watch doesn't have enough data capacity to capture the entire effort, so I will be using a second watch as well. I plan to start with my watch, trade for the second one after about 30 hours, then get my watch back after about 24 hours (after it's been recharged, synced & data cleared) so I can use it for the final section.