This route begins in the in the Olympic National Park at Lake Ozette, the largest unaltered natural lake in Washington state; it's picturesque waters are a shining example of the beauty of the Pacific Northwest; they provide critical habitat for Ozette Lake Sockeye, one of several iconic Salmonid species that are federally listed under the endangered species act.  The Olympic Peninsula Traverse passes through a diversity of habitats and unique ecosystems; expect frequent encounters with both marine and terrestrial wildlife as you scamper over a 40-mile stretch of wild coastline located with Olympic National Park that extends from Cape Alava, the westernmost point in the contiguous United States, to the mouth of the Hoh River.  This section of the traverse includes long stretches of both sandy and rock beaches, slippery tide-pools, and steep overland trails over otherwise impassable headlands.  This area is the traditional land of the Makah, Quileute, and Hoh, great whaling tribes of the Pacific Northwest.  Native American petroglyphs are visible near the high-tide line at wedding rock including one that depicts a wedding scene and other depicting whales (Pacific Northwest Trial Digest:2020 edition; https://www.pnt.org/pnta/know-before-you-go/plan-your-trip/guidebooks/). At the Hoh River, the route turns east and inland, leaving the Park for a thirty-mile stretch that passes through private and state timber lands before entering the inland portion of the Olympic National Park and ascending the Bogachiel River Trail through old growth and temperate rainforest habitat.  Expect wet feet!  The traverse ascends into the rugged Olympic Mountains following ridgeline trails such as the High Divide Trail with scenic views of the popular Seven Lakes Basin area, and then incorporates a series of extended descents and climbs primarily along well-maintained creek-side trails (e.g. Boulder Creek, Elwha River, and Dosewallips River). The final stretches of the Traverse pass from the National Park briefly into the Buckhorn Wilderness of Olympic National Forest, and then into the small town of Brinnon where the Dosewallips River spills into the Puget Sound.

Follow the trail from the public parking area on the north end of Lake Ozette to Cape Alava (3.5 miles,https://www.wta.org/go-hiking/hikes/cape-alava). The Cape is the westernmost point in the contiguous United States and is the terminus of the Pacific Northwest Trail (PNT).

From Cape Alava, follow the PNT in reverse for 20 miles to the mouth of the Quillayute River near La Push, Washington (https://www.pnt.org/pnta/maps/). Rather than crossing the river via a boat ride (the primary PNT route as described in the Pacific Northwest Trial Digest: 2020 edition), the Olympic Peninsula Traverse employs the 9 mile alternative circuit route around La Push which travels east along Mora road for 4.2 miles, then southwest along the La Push road for 4.8 miles before rejoining the main PNT route at the Third Beach Trailhead.

From the Third Beach Trailhead, continue to follow the primary route of the PNT (https://www.pnt.org/pnta/maps/)  for an additional 135.5 miles to the intersection of the Constance Pass Trail and the Dosewallips River Trail (47.748199, -123.207802).  At this point, the route departs the PNT which bends northeast toward Port Townsend and includes a section of road not open to pedestrian traffic (Pacific Northwest Trial Digest: 2020 edition).  The Olympic Peninsula Traverse instead continues east along the Dosewallips River toward the Puget Sound’s Hood Canal and Dabob Bay at Brinnon, Washington.  This alternative finish to Section 9 of the PNT allows for completion of a breakers to bay traverse of the Peninsula in an unsupported style.  The finish is accomplished by following the Dosewallips river trail to the Dowewallips Road (https://www.nps.gov/olym/planyourvisit/west-fork-dosewallips.htm), ending at the intersection with highway 101 (47.69901, -122.89617) after a cumulative decent of approximately 18 miles. 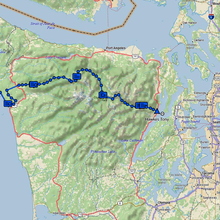