Narrow Neck is an ancient plateau in the Blue Mountains, characterised by sandstone cliffs towering above the valleys below. It narrows to a few metres wide in places. Although the cliffs look impenetrable from afar, there is a maze of ledges, chutes and scrambles which can be navigated to crest the cliffs. Most if not all of these routes were pioneered by Gundungurra, Dharug and possibly Darkinjung people. They were later inherited or (re)discovered by miners and bushwalkers. This fascinating history is documented in two books, Narrow Neck and the Birth of Katoomba by Jim Barrett, and The Passes of Narrow Neck by Keats and Fox.

Safety
This route is only for experienced scramblers who understand the risks, and who have rehearsed every metre in advance. Only two of these passes are maintained by National Parks - any other ropes, spikes, chains or ladders you encounter could snap. You need to be competent with your own ropes / harness. Understand how your judgement and reflexes are affected by fatigue before attempting this.

The Route
The challenge is to complete each pass, in any sequence you choose, then return to your start point.
It's not necessary to descend as far as the valley floor after each pass, just to clear all significant hurdles through the cliff line.
Here are the passes included in the challenge, listed clockwise starting at North, with a brief description of each crux:

Rennie's Tunnel is excluded from the list because it could cave in.
*Disregard the description in Keats/Fox's book, they made a navigation error, and abseiled in an area too dangerous to scramble. 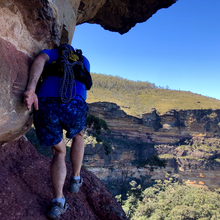 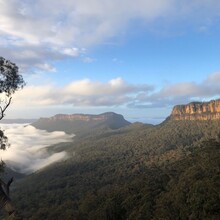 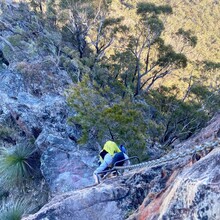 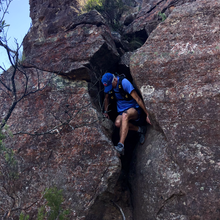 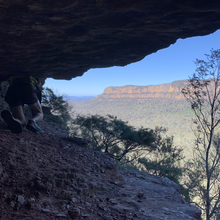 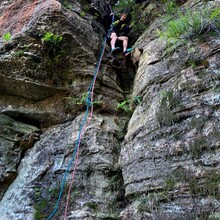 If anyone is considering the route:
Here's a GPX with two adjustments to our line - that should knock off an hour or two.
A friend asked me a few questions about the route, which I've answered in a google doc here.
I also talked about the route with Buzz on the podcast.