Located in the heart  of Rio de Janeiro city, Pedra da Gávea is a monolithic mountain in Tijuca Forest. Composed of granite and gneiss, its elevation is 844 metres (2,769 ft), making it the highest mountain in the world that ends directly in the ocean. Trails on the mountain were opened up by the local farming population in the early 1800s; today, the site is under the administration of the Tijuca National Park.

After reaching the top of Pedra da Gávea, at an altitude of 844 meters, it is easy to understand why it is coined the most difficult trail in town. Visitors can reach the top of the monolith after a hard and demanding trek of approximately 3 hours.

The hardest leg of the trail, known as Carrasqueira, is a steep wall of rock almost 30 meters high, which is safer to be carefully climbed with rappelling equipment. The reward: one of the most stunning views of the Wonderful City.

From the top, visitors can see the Copacabana, Ipanema and Leblon beaches, the Rodrigo de Freitas Lagoon, the Dois Irmãos Hill and Christ the Redeemer. To top it off, the place is surrounded by the sea on one side and the Tijuca Forest on the other side.

Climbing Pedra da Gávea is only for experienced trekkers. There are passages that require technical climbing knowledge and skills.

There is a purported inscription carved into the rockface, which some claim is in Phoenician, a Semitic language known to modern scholars only from inscriptions. According to Paul Herrmann in his book Conquests by Man, the inscription on the mountain had been known for quite some time, but had merely been attributed to "some unknown prehistoric American people". Closer examination, however, led some researchers to believe it was of Phoenician origin.Today, however, most researchers suggest that the inscription and "face" are merely the results of erosion. 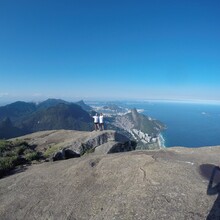 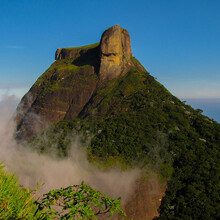 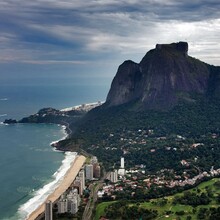 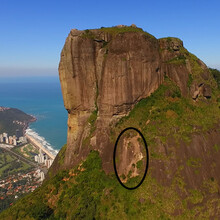 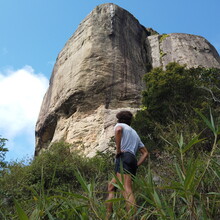