This route is excellent stacked upon excellent. It is a Red Rocks classic and run-scramblers dream, full of exposed 4th/5th class terrain, handlines, and route finding. (TL;DR: this is not a casual trail run.)

The Rainbow Cirque is a high-traverse around the grand amphitheater created by the Rainbow Massiff tagging 5 key peaks/sub-peaks (each with its own summit register).

The peaks are as follows:

Photos should be snapped on each of these summits by future attempters.

The start/finish of the route is at North Oak Creek Trailhead, next to the sign marking the start of the Arnight Trail.

The goal in creating this route is to provide as clean and aesthetic of a "cirque style" route tagging these significant Red Rocks peaks along the way as possible, while still keeping the difficulty within the intrepid run-scrambler's acceptable domain...IT WAS A SMASHING SUCCESS.

Important note: to keep with the aesthetics of this route attempters should not use "Rainbow Direct" (which has its own FKT) to ascend Rainbow Mountain but instead follow the included GPX along the Arnight Trail to ascend (or descend) via "Rainbow with Ledges" on the Northeastern aspect, keeping the ascent and descent within the bowl created by the 5 peaks.

The challenge in creating this FKT route on Rainbow is that the “peak” or the top of the triangular formation which sits on the front (eastern face) of the mountain facing the Red Rock Canyon Scenic Drive is not the actual high point of the massif. The highest point is the top of Rainbow Wall. So the question has always been, which summit do you tag? The Rainbow Cirque is the answer to this question. And since you’re up there, you might as well hit the other significant high points “peaklets” that have summit boxes.

All in all, one the of the best days I have had out in quite some time. FKT or not, it is a masterful way to experience what Red Rocks has to offer the adventure run-scrambler. Five-stars. Highly recommend. - Jason Hardrath 100+FKTs

Thanks to Chris Gorney for putting in the work to find all the old scramblers routes and rehearsing them, then finding lines to interconnect them into this masterpiece!

Definitely look at Christopher Gorney's YouTube channel for a video with tons of footage from this route! 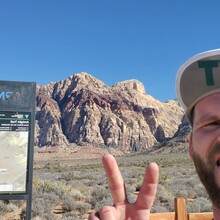 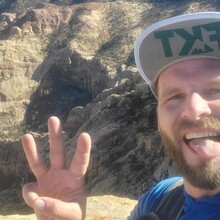 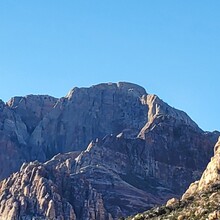