The Rivanna Trail is a series of footpaths, trails, and greenways within the Rivanna River watershed that link up to create a 20-mile loop around the town of Charlottesville, VA. 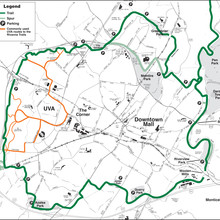 This route on the old FKT site
http://fastestknowntime.proboards.com/thread/500/rivanna-trail-charlottesville-…

I will be attempting the first supported female FKT of the Rivanna Trail on Saturday, December 28 beginning at 0700 from Riverview Park and running the classic Counterclockwise direction. Like Neal Gorman, I will be following only the green RT signs. I will also be running the loop supported with Jason Farr starting the first few miles with me, and my husband Rusty and daughter Virginia crewing and finishing up the last few miles.

As can be the case with urban trail systems, the route has changed somewhat from when Neal set his FKT, so I am interested to know the current mileage. I will document my run using my Sunnto 9 watch as well as with Strava. Most importantly, I want to set a women’s FKT on a route that was one of my first long local trail runs back in my rookie years as an ultrarunner. Rollin Stanton, Pete York, and I were the first people to run the entire loop when it was completed in 2001, and many people have hiked, biked, and run it since — it is a popular Winter Solstice tradition to run the loop, and the mountain bikers ride the “Tour de RT” each year.

I have been inspired by my friends Alyssa Godesky and Jennifer Pharr Davis to try my hand at this particular FKT, and my hope is that more women will follow me and go for the supported and unsupported records!

Female Supported FKT is set! 3:46:51. Jason Farr and I started at 0700 from Riverview Park in Charlottesville, Virginia. The weather was perfect -- clear skies, dry trail, low water, temps in the 40s. In my declaration of intent, I stated that I would follow all Green RT signs as Neal Gorman had done when he set his FKT in 2012. Since that time, the RT has changed and expanded in places. For example, we did not cross the train tracks or walk through the culvert behind Charlottesville High School, but instead followed a new Green RT trail section along the tracks back to the neighborhood roads that link up to the RT a mile or so down from the "old way" of trespassing over the tracks and through the culvert. The Rivanna Trails Foundation describes this section:

"We hope to build a foot crossing through the culvert. It is illegal to cross over the railroad tracks or through the culvert. To bypass the culvert, turn left at the culvert through the kudzu patch and pick up the trail leading back to Melbourne (or, back-track along the previous segment or the paved path). Turn right and follow Melbourne past the high school until it ends at Kenwood. Turn left on Kenwood, immediately right onto Galloway Drive, and then the second left onto Jamestown Drive. Follow Jamestown until it ends at the cul de sac. Cross the bridge over Meadow Creek into Greenbrier Park, then turn left to rejoin the rustic Trail. Spurs on both side of the bridge lead west from the railroad culvert. (The City plans to build an additional bridge at the culvert to make a loop within the park.)"

Becca Weast met us around mile 11 and finished the last eight miles with me. We successfully followed all Green RT signage all the way to the (knee-deep) river crossing at Moore's Creek as it dumps into the Rivanna River at Woolen Mills. My husband Rusty and daughter Virginia were waiting at the finish and took the photos submitted to the FKT website.

This is a soft FKT. From what I see on Strava, other women have run this loop faster. However, none have officially gone after the Supported FKT and it was my intention to highlight this beautiful local trail and inspire more women to challenge themselves by officially going for the FKT, supported or unsupported. I hope some badass dirt chick takes it down soon!

I will be attempting 5 laps of the Rivanna Trail loop starting on October 16, 2020 at 6 am. I will start and end each loop near the Meadowcreek Disc Golf course. I plan to run supported, with friends running with me at times or crewing me for food or supplies. I plan to take trails over roads where possible. I plan to run each lap in the CCW direction.  I will record the run with a Suunto GPS watch with external battery charger as part of the documentation of the attempt.

I'll be attempting a female supported FKT of the Rivanna Trail on Saturday, November 21st beginning at 7am from Riverview Park. I plan to run the counterclockwise direction. I'll be running the loop with 2-3 friends, and my husband is going to crew.

I am attempting the first unsupported FKT of the Rivanna trail on Sunday July 11, 2021.  I'll be starting around 6am from the trailhead at the Woolen Mills/Selvedge Brewing parking lot, and heading clockwise.

I will be making an unsupported attempt at the “double loop” variation tomorrow at about 6:30 am starting at the Bodos on 29.

Planning to make an unsupported/self-supported attempt at the single loop tomorrow for the women's fkt.