Rownd Mynydd Du (Black Mountains Round), is a circular fell running round devised by Brett Mahoney (first completed in winter conditions on 04.12.21 by Brett Mahoney & Tim Woodier) that starts and finishes in the market town of Abergavenny, summiting every mountain and significant hill in the black mountains area of the Brecon Beacons National Park.

Mountains/Hills in order of appearance:

The route starts and finishes at the scout hut in Abergavenny, heading directly out of town the find the rholben and summiting the Sugar Loaf.

Leaving the Sugar Loaf via the Pen-Y-Fal ridge, the route heads to Llanbedr before ascending Perth Y Pia to Table Mountain.

From Table, the route heads north over Pen Cerrig Calch, Pen Allt Mawr, Pen Twyn Glas, Mynydd Llysiau then leaving the ridge to the west for an out and back on Mynydd Llangors and Mynydd Troed.

From there, you ascend the dragon's back to the summit of Waun Fach, heading south to Pen Y Gadair Fawr, Pen Twyn Mawr & Crug Mawr.

From Crug Mawr, head down through the southern edge of Mynydd Du forest, cross the valley road and head up to Bal Mawr.

From Bal Mawr, head north along the ridge to its end, summiting Chwarel Y Fan, Twyn Talycefn and Rhos Dirion.

Head east to summit Twmpa, cross gospel pass and summit Hay Bluff before an out and back to Black Hill.

Follow the Offa's Dyke path south along the ridge taking in the two unnamed summits and Hatteral Hill before dropping down to Cwmyoy.

At Cwmyoy, head west to hit the top of the Gaer before dropping off through a nature reserve to pick up the track to Bryn Arw.

Head directly off Bryn Arw to hit the old Hereford road, then pick up the beacons way path to the final summit of Skirrid Fawr.

From the Skirrid, head down the ridge and onto the road for the final stretch back to Abergavenny to finish.

The summits can be tackled in any order as long as all are visited. 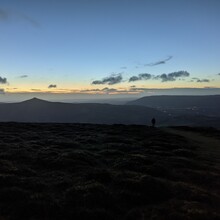