Boulder's Flatirons on the east face of Green Mt are an iconic location of moderate climbing and are the site of many speed records. Specifically, much attention is paid to the great east faces of the First and Third Flatirons, but many other records also exist on the other three Flatirons, for various link-ups, and on other similar formations that are non-numbered flatirons. Bill Wright's website is a treasure trove of history in speed-based efforts in this arena, but this post is an effort to present this information with cleaner organization and in a more public location where on-going efforts can be easily documented and updated.

Most FKT interest in the Second Flatiron has been as part of a link-up.  Any FKT should be a summit route - the most common line of ascent would be Free For All (5.6).  Darren Smith established a new summit route he named "Freezeway" (5.7), which is also valid.

Sonia Buckley appears to have the women's FKT (via Free For All), but we do not know the date. 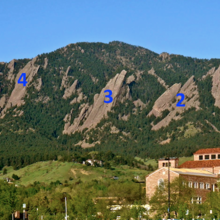