The Shiga Round Trail, popularly known as Shiga 1 ("Shiga Ichi"), is one of the longest and toughest trails in Japan, forming a full 438-kilometer loop with 28,300 meters of elevation gain (when done counter-clockwise) around the perimeter of Shiga Prefecture - home to Japan's largest and most spectacular lake - Lake Biwa.

In 2019 a group of volunteers undertook the task of carving out several tens of kilometers of new trails through the last unexplored areas remaining between the vast network of already established routes circling the prefectural border, and in doing so, successfully connected them all into a singular, continuous circuit trail - officially unveiling the Shiga Round Trail. One of the route's most appealing attributes is that over 90% of its length unfolds along unpaved forestry roads and hiking trails, including through several beautiful, and well-known mountain ranges that routinely draw hikers from all over the Kansai and Chūbu regions.

The trail can be broken down into its major sections, with each area described below in more detail starting with Otsu, the capital city of Shiga Prefecture, and continuing around in a clockwise manner.

Along with the Kōyasan (Mt. Kōya) in Wakayama Prefecture, Kyōto's Hieizan (Mt. Hiei) has been one of Japan's most important centers of religious worship since ancient times, and the buildings comprising the Enryaku-ji temple/monastery compound are spread across its broad summit area. This temple is headquarters to the Tendai sect of Buddhism, and the origins of trail running in Japan can be traced back to one of Tendai's, and one of the world's most difficult ascetic practices - the "Sennichi Kaihōgyō." This ultimate test of religious austerity with over a thousand years of history sees monks complete a 1,000-day ritual pilgrimage over a 7-year period, requiring them to walk/run extreme distances through the surrounding mountain trails under incredibly and increasingly harsh conditions.

The "Hirasanchi" refers to the Hira Mountain range, which is located along the western edge of Lake Biwa, and whose highest point is the 1,214m summit of Bunagatake (Mt. Buna). Most of this mountainous area falls within the borders of the Lake Biwa Quasi-National Park, and its picturesque landscapes were immortalized long ago in a woodblock print created by the last great ukiyo-e master Hiroshige, entitled "Evening snow at Hira." The print was one in a famous series of 8 such prints collectively known as the "Eight Views of Ōmi" (modern day Shiga Prefecture). Nowadays, thanks in part to convenient access from the major cities of Kyōto, Ōsaka and Kōbe, the area draws large numbers of hikers and skiers year-round. The Lake Biwa Valley Ski Resort located near Uchimiyama (Mt. Uchimi) in the southern portion of the range, is a popular tourist destination not only during the winter, but also in summer amongst those seeking panoramic mountain vistas. The nearby section of trail between Mt. Horai and Mt. Gongen via Mt. Hokke is representative of the beauty of the Hira area, as it runs along a scenic treeless ridge through a sea of bamboo grass while offering excellent views of Lake Biwa below.

This 80-kilometer trail connects the central watersheds that surround the city of Takashima.  The trail passes through beautiful beech forests and overlooks both Lake Biwa and the Sea of Japan.

This trail is named for the town in which it is located in the northernmost part of Shiga Prefecture, one of the most heavily snowed areas in the region.  The trail is comprised of several routes, but the Shiga Round Trail mainly passes along the central watershed section.

This section of trail was created in 2019 for the purpose of completing the Shiga Round Trail. It first connects the 2nd and 3rd highest mountains in Shiga Prefecture, 1317m Mt. Kanaguso (also known as Mt. Kinpun) and 1259 m Mt. Bungen (also known as Mt. Shanoh) and continues traversing along the north ridge of Mt. Ibuki, ultimately reaching the summit - the prefecture's highest point. The entire stretch hovers around 1,000m above sea level and is characterized by deep snow in winter and cool breezes blowing through the beech forests in summer.

At 1,377m Mt. Ibuki is not only the highest mountain in Shiga Prefecture, but also designated as one of the '100 Famous Mountains of Japan.'  As such, upwards of 30,000 climbers from the surrounding metropolitan areas come to scale it's slopes each year.  It has been regarded as a sacred mountain since ancient times, and is even referenced in Japan's two oldest written chronicles of history, myths and legends - the Kojiki and Nihongi. Legend has it that Yamato Takeru, upon returning from a military conquest to the east, attempted to defeat the Deity of Mt. Ibuki, but was instead stricken with illness and died soon after.

The Suzukua mountains lie along the prefectural borders of Gifu, Mie and Shiga, and a trail of 100 kilometers in length with excellent views of Ise Bay and the Chita Peninsula spans the entire range from Mt. Ryōzen at the northern end, all the way to Mt. Aburahi at the southern terminus. The northern peaks of Mt. Ryōzen (1,083m), Mt. Oike (1,247m) and Mt. Fujiwara (1,144m) are limestone mountains with characteristic karst topography visible around their broad summit plateaus, while the central and southern peaks from Mt. Ryū (1,099m) to Mt. Kama (1,161m) are  composed of granite and are distinguishable by their comparatively pointy pinnacles. The Mie side is generally steeper while the slopes on the Shiga side are gentler in comparison. Mt. Gozaisho (1,212m) is one of the most popular mountains in the entire range, thanks to its ropeway that ferries tourists from the base to just below its summit.  Gozaisho is also one of the "Suzuka Seven Mountains", a term used to describe the 7 major summits lying between Mt. Fujiwara and Mt. Nyūdō. Few hikers visit areas south of Mt. Nyūdō, and in particular south of the Suzuka-tōge pass, but despite the relatively low elevation, the trail can be technical with steep rocky sections, and should not be overlooked.

The Shiga Round Trail joins all of the aforementioned trails into a single, continuous loop around the perimeter of Shiga Prefecture, and while some sections are easily navigable and frequently visited, others may not be as clearly marked and/or require the use of a map. Also, even with the reasonably low overall elevations (+/- 1,000m above sea level), an FKT or other attempt at the full circuit requires a high level of climbing skills and experience as well as physical strength and stamina.  Furthermore, doing the trail in a single push is also made more complicated by the fact that there are no mountain huts, few water resupply points and almost no places along the trail to buy food or other supplies.

Despite the enormous physical and logistical difficulties of a thru-hike on the Shiga Round Trail, the route is equally blessed with rewards.  One particularly appealing feature is that the trail intersects with several other historical footpaths that were used for centuries by travelers, merchants, dignitaries, religious pilgrims, armies and more - including the Tōkaidō, Nakasendō and Hokkoku Kaidō. As such, along the trail's length one can experience not only beautiful natural scenery, but also pass by numerous historical remnants and through expansive rural landscapes that bring Japanese history alive while also showcasing the daily life of the area's modern residents. 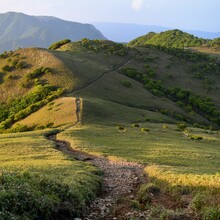 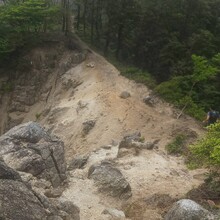 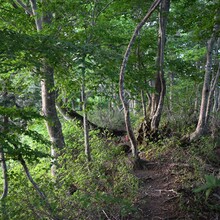 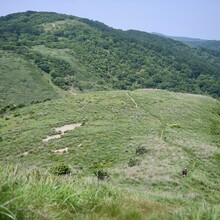 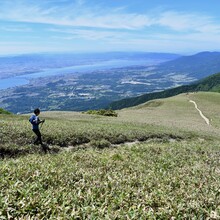 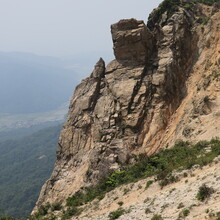 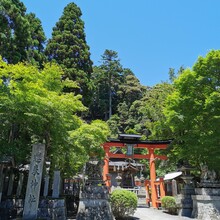 it looks so rad!