The Sierra High Route is a 195 mile on and off trail route through the Sierra Nevada Mountains of California. It was established by Steve Roper and described by him in his book Sierra High Route: Traversing Timberline Country, first published in 1982. Roper did not really envision the High Route as a thru-hike, but rather imagined people would do it in sections, and he laid out his book that way. As a thru-hike it can feel somewhat disjointed, with challenging and remote off trail sections broken up with often fairly long trail sections, particularly on the John Muir Trail. The High Route is point-to-point, beginning on the west side of the Sierra in Sequoia National Park and ending on the east side north of Yosemite National Park. As such it has one of the longest and most convoluted car shuttles anywhere.

Wikipedia states "Very few people have hike the entire Sierra High Route in one trip." It's long, difficult with few easy opportunities for resupply. But, since Andrew Skurka published his topo map set and databook this may be changing. Roper's information was more general, he wanted people to explore, while Skurka provides more detail and precision.

We are not aware of any specific FKT attempts on the High Route until August 2015, when, coincidentally, Brian Lucido and Luke Nelson (with Cody Lind) began their FKT attempts just 1 day apart. Nelson & Lind quit after 2 days, but Lucido set the FKT at 6d13h35m (unsupported). Lucido wrote a detailed report and provided his full GPS track, along with some great additional info, here.

Prior to Lucido, Andrew Skurka and Buzz Burrell hiked the SHR in 8d4h in July 1-8, 2008 (with resupply at Reds Meadow). The pair were not pushing for time, but doubtless set the FKT to that date.

On my SHR journey, or any trip to the high Sierra for that matter, I do not feel as if I have “bagged” or “tagged” or “crushed” anything. These terms imply that I have somehow conquered the mountains but instead it’s the mountains that have given me everything on my visits to the high Sierra – the inspiration, the motivation and the memories that will last a lifetime. I want these mountains to remain wild forever. There are so few truly wild places remaining in the world, particularly in a populous state like California, where one can find nature in its purest and unfettered form. I am grateful for the opportunity to visit these places that humans will hopefully never “conquer.” - Leor Pantilat

Editor Note:  The attached .gpx file is included as a general reference - it is not the correct route - follow the Roper description not this file. (FKT'ers have submitted their data file for verification and asked us not to publish it). 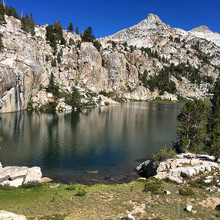 This route on the old FKT site
http://fastestknowntime.proboards.com/thread/585/ropers-sierra-high-route-ca

I'm hoping to get a decent female time on the board for this one later this month. Planned start date Aug 19th.

I got an (unsuccessful) attempt in a few weeks ago. With 4 days off work, I figured it would be a little extra motivation to try and get under that 4 day mark! I started out at a solid pace, but unfortunately my feet were not ready for 18+ hours a day on the move and starting on day 2 they got more and more bruised. As the days went on I'd have to stop more and more to get off my feet and I ended up slowing down to a 5.5 day pace. Bailed at Reds Meadow 3.5 days in.

I ate 16 packs of oatmeal, 9 PB+J’s, 8 Cliff Bars, 10 Shot Blokz, 8 Picky Bars, 8 Epic Bars, 4 Gu packets, and 16 servings of various Freeze Dried Mountain House. I brought a sleeping pad, sleeping bag, one warm layer for top and bottom, cooking pot / gas canister, 3L worth of water storage, a water filter, and a small battery charger for my phone / watch. There were some extreme highs and extreme lows along the way!!

Overall, a spectacular experience through a highlight reel of the Sierras. Can't wait to come back some other year!