Route: Sugarloaf Trail, uphill then downhill, out and back

Sugarloaf Trail is a classic of Ohiopyle State Park. It is the rockier, muddier, cousin of Baughman Trail, with a longer ascent to boot. Baughman Trail and Sugarloaf Trail begin at the same location, just across from the Middle Yough takeout on the Great Allegheny Passage rail trail in Ohiopyle, Pa. While Baughman climbs along the ridgeline of the Middle Yough river gorge on the left side of Sugarloaf/ Ohiopyle Road, Sugarloaf climbs along the ridgeline above Meadow Run (not visible from the trail) on the right side of Sugarloaf/ Ohiopyle Road and eventually travels away from Meadow's ridge toward one of the highest points of Ohiopyle State Park, the Sugarloaf sledding and cross country ski area.

For the starting point of the FKT route, park in the parking lot of the old train station and next to the Middle Yough takeout. Landmarks are the Ohiopyle House Cafe - the parking lot is across from that. It's easy to find.

Run down the Great Allegheny Passage, away from the train station, upstream of the river, for a very short bit. You'll see a sign for Baughman and Sugarloaf on the right, directly across from the Middle Yough takeout. Turn right, then stay right, to remain on Sugarloaf Trail. After a half mile or so, you'll cross a gravel water tower road. Take a slight left then a quick right to cross onto Sugarloaf Trail. You'll cross the paved Sugarloaf/ Ohiopyle Road in less than a mile.

In the past eight years, the Ohiopyle Biking Club has improved the Sugarloaf Trail system by creating fun, flowing single track and blocking off the "old Sugarloaf." It is generally easy to follow the new and improved Sugarloaf trails, which is what the FKT follows. The old ones are blocked by trees and limbs. When at a crossing and unsure of which way to go, stick to the narrow single track, do not take the old, wide paths, and follow the red blazes. The new trails are well-worn and obviously newer, made for challenging but fun mountain biking.

At nearly four miles, you'll cross Grover Road, a gravel road, and at this point the trail becomes slightly less rocky and technical than the lower four miles. You'll cross another gravel road, Presley Ridge, in a quarter mile after Grover. Once past Presley Ridge Road, take the single track on the left. Soon you'll come to a sign the says Baughman to the left and Sugarloaf straight uphill. Stay on Sugarloaf. In several yards after the Baughman/ Sugarloaf signs, you'll see a single track that bears left - DO NOT TAKE IT. Stay straight, running uphill for about a mile. The trail turns from dirt to grass here and comes out at the sledding/ cross country ski area. Run up the sled hill - it is a very wide, grassy hill clearly made for sledding in the winter. Stay on the left side of the sled hill so that you can easily see where Sugarloaf Trail continues straight at the top of the hill. You are now on Sugarloaf's cross country ski trail, which the state park mows to keep it a wide, grassy path in the summertime. It goes for about 0.8 miles, until you reach a dirt road, Sarver road. This is the halfway point. Touch Sarver with both feet, and turn around.

Run back the way you came!

A note about mileage: When I clocked this on my Garmin fenix 6s Pro Solar watch, I got 5.7 miles at the halfway point and 11.24 total. Knowing that my watch ALWAYS clocks less mileage on my return trips, because I run faster on the way back than out, I turned on GAIA at the halfway point, Sarver Road, to get a more accurate mileage reading on the way back. Sure enough, Garmin clocked the way back as only 5.2 miles, whereas GAIA clocked 5.8 miles. Thus, to submit the most accurate mileage for this FKT, I multiplied GAIA's reading by two, equaling 11.6 miles. 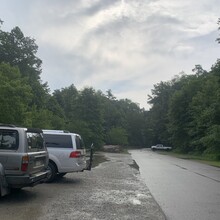 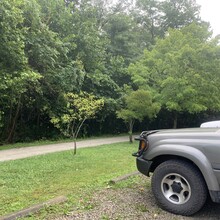 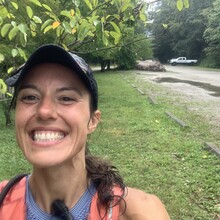