The Torrey C. Brown Rail Trail (TCB), the official name of the Northern Central Railroad (NCR) Trail, is a rail trail that runs along an abandoned railroad corridor where the Northern Central Railway once operated. The trail extends 20 miles from Ashland Road in Cockeysville, Maryland to the boundary with Pennsylvania. At the Pennsylvania line, the Torrey C. Brown Trail becomes the York County Heritage Rail Trail (part of BicyclePA Route J) and continues to the city of York.

The trail is 10 feet (3.0 m) wide with a stone dust surface and the majority of the trail runs along the Gunpowder River and Beetree Run.[1] Popular activities on the trail include horseback riding, jogging, walking, hiking, fishing and biking. It is open to the public from dawn to dusk, seven days a week throughout the year. The trail is also pet-friendly as long as the pet is on a leash.

The TCB makes up a segment of the East Coast Greenway, a 3,000 mile long system of trails connecting Maine to Florida.

Historical significance
The Northern Central Railway, built in 1832, ran between Baltimore, Maryland, and Sunbury, Pennsylvania, and was one of the oldest rail lines in the country. The railway serviced the growing Baltimore, York and Harrisburg industries, had 46 stops, 22 of which were in Maryland, and operated for 140 years. It carried passengers, people vacationing at Bentley Springs, and freight between Baltimore and York or Harrisburg, Pennsylvania. During the Civil War, the Pennsylvania Railroad-controlled Northern Central served as a major transportation route for supplies, food, clothing, and material, as well as troops heading to the South from Camp Curtin and other Northern military training stations.

Already in financial trouble, the NCR ceased operations between Cockeysville and York in 1972 after Hurricane Agnes battered its bridges. The old bed, which was converted to a rail-trail in 1984, can still be seen today. Historical markers can be found along the trail such as the Monkton Train Station that underwent renovations and is now serving as a museum, gift shop, and ranger station.

History and evolution
In the early 1980s when it was proposed to place the hike and bike trail in the place of the train tracks, a contentious battle raged between property owners and the state. The owners contended that the property was taken under eminent domain for the purpose of train tracks, and that once the property was no longer to be used for a train the property rights should revert to the previous land owners.

The state prevailed in its fight for the property and the Maryland Department of Natural Resources converted the corridor into a trail which opened to the public in 1984. The trail is used by hundreds of people daily by bicycle, foot and horse. The trail also provides access to the Gunpowder River and Loch Raven watershed for boating and fishing. In honor of Dr. Torrey C. Brown's unconditional support for the trail, it was renamed the Torrey C. Brown Rail Trail, after the third Secretary of the Maryland Department of Natural Resources, in 2007. 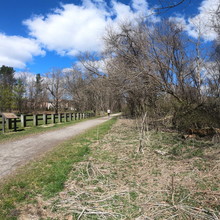 I may be shooting for this one this weekend on March 21st or 22nd 2020. I'll have strava data and hopefully photos of start/finish to back me up if I do. We'll see what happens...