Ubehebe Crater is a large volcanic crater 600 feet deep and half a mile across. We often hear mistakenly that "Ubehebe" means "big basket", but the Paiute name Ubehebe was first applied to the 5,678 ft. Ubehebe Peak, 24 miles southwest of the crater. How the name Ubehebe became associated with the crater is not known. To the Timbisha Shoshone Indians, the crater has been known as "Tem-pin-tta- Wo’sah", meaning Coyote’s Basket. Although applying this translation to the word Ubehebe has produced a great deal of confusion, but comparing the crater to a basket is appropriate.

How did these craters originate? They are known as maar volcanoes, created by steam and gas explosions when hot magma rising up from the depths reached ground water. The intense heat flashed the water into steam which expanded until the pressure was released as a tremendous explosion.The western cluster of Maar volcanoes was the first to form, then the southern cluster, followed by Ubehebe—the largest of them all—possibly as recently as 300 years ago.

Ubehebe Crater is listed in multiple guides, including the Falcon Guide, as a "TO DO" hike of Death Valley National Park. But to do it only once is more of a Strava Segment. This FKT will seek to see who is willing to test themselves for 24 hours on this loop.

Why 24 hours of Ubehebe Crater?

Like 12hrs of Wreck Beach Stairs, 1 hour of Maryhill Stonehenge, or 24hrs of Trinidad Head Loop sometimes we humans are just drawn to test ourselves in odd ways, in unique places and Ubehebe Crater is exactly such a loop. Its location in Death Valley National Park makes it an ideal location for a winter 24 hour race against the clock, though perhaps a separate category will someday be established for those willing to take this challenge on in July-August, when Death Valley is a scorching inferno. This FKT will be a tally of the number of complete loops completed within the 24 hour time window. Be sure to submit your lap total and final finishing time (under 24 hours).

If you want to see some great video footage of what your are in for watch HERE and HERE for great videos!

Submitted by Jason Hardrath (Follow on IG or FB) 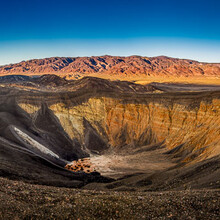 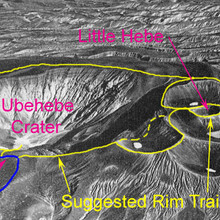 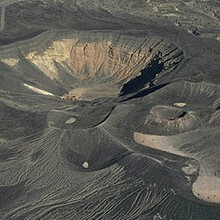 The strava segment for the single loop:

Attempt for a Cause:

For my birthday this year, I will be doing something I love, spending time outdoors pushing my body for 24hours. I am going to do something very silly but for a great cause. I am going to attempt to run 32 laps around the Ubehebe Crater to set the FKT (or OKT) for this loop. I am asking for donations to Big City Mountaineers. I've chosen this nonprofit because, as a physical educator, their mission means a lot to me! I believe physical endeavor and the outdoors have so much to teach us, especially young people.  I believe in education through the physical, not just education of the physical. Invaluable lessons on the ecosystems around us, discipline, managing difficult emotions, working towards a goal, teamwork, and...really ourselves are found out there...and I hope you'll consider contributing as a way to celebrate with me. Every little bit will help me reach my goal. I've included information about Big City Mountaineers below.

Donate to my fundraiser here