James Varner submitted this AT state segment for Virginia, with times for some past efforts:

Virginia is by far The Appalachian Trail's longest state section at 541.2 miles, nearly double the mileage of Tennesee and Maine the 2nd and 3rd longest sections respectively. As far as we know no one in recent times has made an FKT attempt on just the Virginia Section of the AT so the current FKTs are all likely set by folks who were doing the entire AT. We do recognize that setting an FKT while in the midst of running a much longer trail is not the same as going for an FKT for just one section of that trail and we would imagine that their times for just the section would be faster if they were going for just that section not running much further their times are still the fastest we know of for this section. Also since these folks were not going for the section FKT they didn't record specifically when they started and finished the section we have made rough estimates based on the information we do have which in some cases is quite limited therefore for all the reasons listed above all of these times "should be taken with a grain of salt" and we should assume the time would be faster if these folks had actually set out for the section FKT.

Karel entered VA from TN 41.25 miles into a 45.17 mile day on July 26 2018, a day that likely started at 4am and ended at 6pm(in Damascus, VA). There's a good bit of uncertainty to the exact minute he crossed the border due to some weird Strava data on that day. Instead if you use his average speed of 18.6min/mi and multiply by 41.25 mi you have him cross the border at 4:47pm but since he was likely going faster at the end of the run because it was all downhill to Damascus for the last few miles he was likely going closer to 19.5min/mi up to mile 41.25 which would have him crossing the border at 5:24pm. In truth it's probably somewhere in between 4:47pm and 5:24pm but for sake of giving him the benefit of the doubt and to make sure the time I'm aiming to beat is lower than higher I'd go with the 5:24pm time. Karel exited VA on the morning of Aug 6th Karel started at 4am(I assume based on his interview on Fastest Known Podcast) and from his Strava data should have done the first 2.3 miles of the day to reach the WVA border at about 4:41am. this would set the FKT at 10 days 11hr 17min. Because he slept just north of the south border and just south of the north border(not something you would do if you were going for just the section FKT) he ends up with an inflated time.

Joe started the day of July 26 2017 at a campsite near Wautuga Lk at mile point 416(about 51 miles south of the VA/TN border) and according to his Spot data started running at about 10:07am. According to his log sheet Joe covered 62.3 miles in 13 hours and 15 minutes that day(a 12.76 minute per mile pace). Assuming a relatively steady pace throughout the day Joe would've crossed into VA 10hr 50min into his day at 8:57pm but we have a spot waypoint from him in the town of Damascus, VA(4 miles north of the border) at 8:05pm so he must have been going faster than his average pace for the day prior to Damascus plus the four miles from the border to Damascus are downhill so perhaps it would make more sense to start with his time at Damascus and work backwards from there. Joe averaged 11-minute miles from the start of the day to Damascus(which, by the way, is really fast all things considered!) but with the four miles from the border to Damascus being downhill I'd say Joe was probably doing 8 or 9 minutes per mile for those four miles so lets err on the side that favors Joe and say he was doing 8s that would have him crossing the border 32 minutes before arriving in Damascus which would be approximately at 7:33pm. Joe then departed Virginia on Aug 6th and he posted a Spot waypoint at the border at 9:41PM giving him a total time of about 11 days 2hr 8min

According to her daily log in her book, Called Again, Jennifer started the day of July 15th 2011 26.3 miles north of the WVA/VA border during a 48.7 mile day. And in a weird coincidence, she crossed the VA/TN border on July 26th(same day of the year as both Karel and Joe!) 20.5 miles into a 49.8 mile day. Her log doesn't include what time she started each day or how long she was moving each day but if we assume she started at the same time both of those days and assumed she was going about the same speed each day that would give her a time of about 2 hours less than a full 11 days so ~10 days and 22 hours. But this is a very rough estimate due to not knowing a few important details. 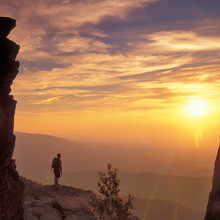