The Veluwezoom is a wonderful and varied National Park outside Arnhem in the Netherlands. It is also a well visited area all year round. There are deep forests, green pastures, open bush, heather and grass land, and the landscape is steeped with ridges, valleys, and peaks formed by the melting glaciers after the last ice age. The park landscape rises above the flat Rhine and Maas valley and offers many wonderful views. In the south-center of the of the park is an open very hilly area called Posbank that is highly popular due to the many peaks with views, and beauty with the changing season. Here you can find freely roaming horses and a flock of sheep in the summer period. The park and the forests to either side are crisscrossed with foot paths, there are several MTB routes and fast downhill valleys, there are horse-riding trails, paved cycling paths and a few paved roads. The park has a few marked paths mostly for shorter hikes and the some longer MTB routes. One 15 km (7 peaks) trail has been accepted as FKT route. Like so many other places in The Netherlands the area is instead marked with numbers at the junctions (knooppunten; KPs) of the paths so you can plan your route by going from KP to KP. The many signs will also point in the direction of other junctions.

This area is probably the most diverse in terms of beauty, technical trails, and opportunity to have significant elevation in The Netherlands. As such it deserves some really challenging FKT routes apart from the 15k route. Inspired by the ExtraTrail system of the Ardennes two more routes was designed following 1½ years of reconnaissance running on the area. The red route is 31k with 700 m of elevation and the longer black route is 46k with 950 m of elevation. The black route is an extension of the red. There are several options to choose from in terms of start/goal since the routes passes several parking options for cars and bikes. The descriptions starts/ends at the parking by the Houtplaats restaurant, which also can be reached by foot from the train station in Rheden.

Pas by KP 54 and head to KP 01 viewing point. Now is another opportunity to fill water and/or get supplies from the café. Head back down the same trail you made the ascent before, passing KP 70 and going all the way to the junction in the Posbank valley. Now make a sharp right toward the west of the Posbank, stay on the harder trail to the left, the sandy softer is for the animals. This trail makes a steep ascent to the west side of the Posbank. As you exit the gate also close to Zijpenberg make a right and slide next to the road. Cross the road and find a small trail into the forest, you then hit a wider sandy riding trail. Turn right and follow this as it slowly turns left and exit the forest. Slide right onto a narrow single trail that crosses a biking path and goes into an open landscape called Rozendaalische Veld with nice views and sandy patches to the right. This trail is heading west and is popular with dog walkers. As you cross over a wider trail and a biking path the route heads up a sandy hill, here you can find a nice single trail heading NE. This trail merges with another trail and heads toward the tall fire tower (brandtoren) to the north. Pass by the tower to the junction with the biking path and several other trails. Still heading north use the wide gravel MTB road next to the paved biking path. After a little while the route heads east (KP 57), follow this through a gate into a big open grass land where highlanders roam freely (the area is very big so you rarely see them). The trail heads mostly NE over a hill and onto a wider gravel road (KP 02). Make a left and head north and pas by the highlander monument that is placed here. At the next junction make a right and follow this trail E turning NE then turning N. You exit the area through a gate and follow a dirt road with a farm to the left. At the next junction (KP 32) make a right and follow a gravel path next to a biking path. After a while you arrive at a parking lot at Elsberg. Shift to the left side of the road to a trail/horse riding path and follow this SE. At a junction where the road turns south and the biking path goes east, pass the gate and make a right following the riding path. There is an MTB trail to your right. Follow the riding path south as it continues alongside the road and the MTB trail. Further south the MTB trail shift over the riding trail so you have the MTB to your left and the road to your right. A little further ahead it shifts back again so both MTB and road is to your right. After a while the riding trail turns SE away from the road and MTB trail and heads toward another parking lot by the Posbank. You now have another road to you left and also a biking path. Take the trail as close to the biking path as possible (KP 62). The trail is winding its way south toward the Posbank café now from the north side. The biking path turns left (east) so it crosses the trail. Turn left onto the biking path then right to the café and KP 01. Again, you have chance to fill water or purchase energy if required. Continue over the road to KP 01 make a left and follow the trail once again on the north rim of the Posbank back toward PK 54. At KP 54 make a right turn and head down the same descent through the Posbank as the first time, again slide left and make a right toward the SE corner. As you exit this time go straight and head up the ridge going SE. At the ridge turn right and follow this trail south bound. Exit the forest through a gate and follow the gravel-turning paved road down to Schietbergsweg. Make a right and shortly after you arrive back at the starting point by the parking lot. 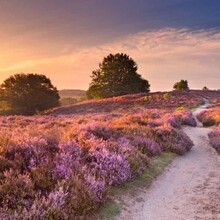 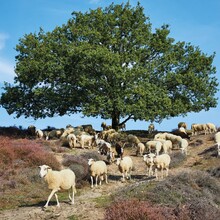 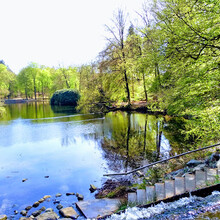 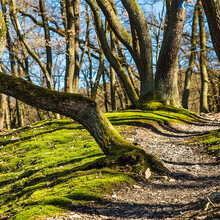 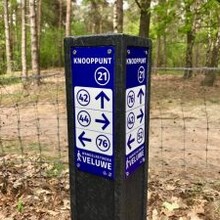 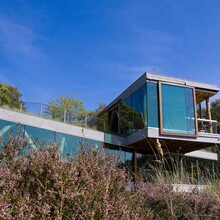 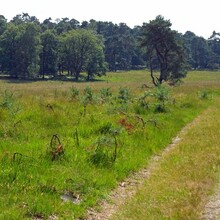 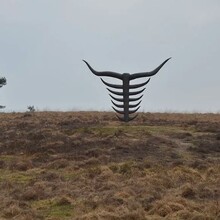 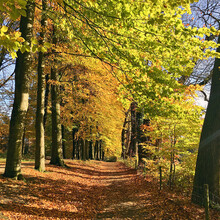 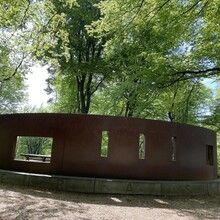 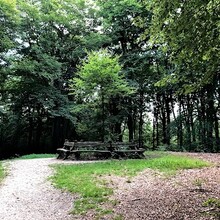 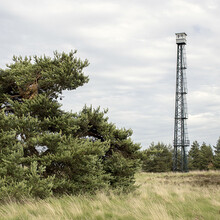 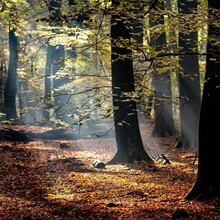