The Westweg (Westvariante) goes from Pforzheim - Basel and crosses the hole Blackforest from North to South. Its the oldest long-distance hiking trail in the Black Forest and was founded in 1900. On the Trail you see the highest Mountains in the Black Forest and all in all its a trail to be recon with. The normal number of Dayhikes is about 12, but its still runnable all at once.

The Westweg ("West Way" or "West Trail") is a long-distance hiking trail in Germany, running north–south through the Black Forest from Pforzheim to Basel. The trail is around 285 km long, and was founded in 1900. It is currently maintained under the auspices of the Black Forest Club. The trail symbol is a red lozenge on a white background. The Westweg is a part of the European Long-distance Trail E1 (North Cape, Norway - Sicily) The route passes through or near numerous villages or small towns, so there is no difficulty in finding overnight accommodation and meals along the route. It would actually require more planning to walk it while staying in youth hostel-type accommodation, or camping. There are a number of services that will transport your luggage to the next accommodation by vehicle, leaving the hikers with only their daypacks for the hike. The route can be accessed at several places along its length by road or public transport, so it is easy to walk part of it or to do day walks along its route.

The first stage of the Westweg leads you from Pforzheim on the northern edge of the Black Forest steadily up to the climatic health resort Dobel. The north of the Black Forest is still relatively densely populated - so Stage 1 leads you not only through quiet, dense forests, but also through Neubürg and past Schwann. The starting point of your hike is the Golden Gate in Pforzheim. It stands at the confluence of Würm and Nagold and marks the first stage of the Ostwegs and the Westweg. From here, the western trail, marked with a red rhombus, leads you past a wooded, gentle ridge to the ruins of Hoheneck. After crossing the Nagold, the trail winds for a while through the city and then into the Pforzheim Arboretum. More than 40 different tree species from all over the world grow here - among others Californian sequoia trees. Shortly thereafter, you are standing on the banks of the Enz, a tributary of the Nagold. The Westweg runs directly along the wooded shore and follows the river valley to the Neuenbürger castle. The castle stands on a mountain spur on the edge of Neuenbürg, which is surrounded on three sides by the Enz.From the castle, the path gently descends and over the Enz. On the other bank, the trail climbs and leads you through the streets of Neuenbürg. After only a few minutes you leave the city behind you and you continue on forest roads. At Schwann it goes close to the edge of the forest and you can enjoy the view over the wide meadows and fields up to the Rhine plain at the observation tower Schwanner waiting.From this point you follow the Westweg through dense forest steadily uphill to the stage destination Dobel. Here you can find different hotels, pensions and apartments where you can spend the night.

The second stage follows an elongated ridge and leads you up to the Hohloh. On the 988 meter high mountain is a lookout tower, which offers you a fabulous view of the northern Black Forest. But already on the way there are always terrific panoramas. Full of energy, you start your tour in the health resort Dobel. From here it goes gently uphill on comfortable forest roads. The first panoramic view awaits you at the Schweizerkopf hut, which is located slightly below the actual summit. From the small hiking hut you have a great view of the Gasibach and the Albtal. The trail meanders over the wooded ridge. On the way you will pass several hiking huts and rest areas, which often have a beautiful view of the surrounding landscape for you. Around the Hohloh, the highest point of the stage, you wander on boardwalks through a vast, untouched moor. The summit itself is densely forested, but thanks to the stone and almost 30 meters high lookout tower, you can still enjoy a fantastic panorama. From Hohloh you hike downhill steadily until you reach the goal Forbach. On this stage, there are no rest stops, so you should provide yourself with plenty of provisions and water before starting the hike.

The third stage on the Westweg runs over a long summit chain and leads you up to the Unterstmatt pass. It is located on the famous Black Forest High Road, the oldest holiday road in Germany. On the way there you hike through dense forests and past idyllic lakes. From the starting point in Forbach it goes straight uphill. In some hairpin bends and serpentine sections you climb up the slopes of the Murgtal until you stand on the banks of the Schwarzenbach reservoir. This offers a sublime sight, especially in winter and spring, when the water rises and the trees are reflected in it. After a short breather it continues: You leave the reservoir and hike along a rocky hiking trail along the narrow Seebach. It is partly fed from the Herrenwieser See, the banks of which you pass on the way up to the Seekopf. When you get to the Seekopf, there is no prospect, but a monument steeped in history: on a large rock there is a memorial plaque for Philipp Bussemer, who is considered the "father of the Westweg". At the Seekopf you have almost completed the entire ascent of this stage and from here you can hike on without major differences in altitude. The next stop is the Friedrichsturm on the Badener Höhe. On the observation deck of the tower you are clearly above the treetops and are spoiled accordingly with a great view. It is only a few minutes' walk from the tower to the Naturfreundehaus Badener Höhe, which is perfect for a cozy break and a delicious meal. Freshly strengthened, you then hike through the forest to the Unterstmatt finish. Here you will find two different hotels where you can stay. 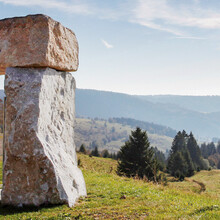 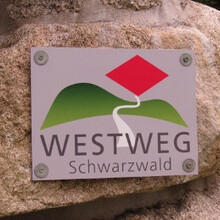 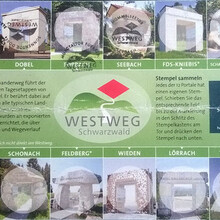