The Northville Placid Trail (NPT) is a 142 mile route running between Waterfront Park in Northville, NY to the Lake Placid History Museum (formerly a train station) in Lake Placid. There are varying perspectives regarding the true Northern Terminus, whether at the intersection of Averyville Rd. and Military Rd. or further at the old train station in Lake Placid, accounting for variation in stated trail distance depending on the source. All current FKT’s run the full distance including road sections between Waterfront Park and the Lake Placid History Museum (the old train station). Historical FKT's include the 122 mile variation that omitted road sections and the old 133 mile route before trail was built from Northville to Benson in 2013.

The NPT is one of the oldest hiking trails in the United States. Its construction began in 1922 and was completed in 1924 as the first major project of the newly formed Adirondack Mountain Club. It bisects the Adirondack Park running through river valleys and crossing some of the wildest, most remote areas of the Northeast. Relatively flat, the length of the trail includes just 17,000 ft of elevation gain with the highest point at just 3,008’ near Blue Mountain Lake. However, given its remote nature and the topography of the Adirondack Lowlands, major blowdown, flooding, beaver activity, ankle-destroying roots and rocks, and tricky stream crossings are typical all along the trail – making what is otherwise a runnable trail slow-going in sections. Fresh water is available in abundance. The trail is traditionally hiked Northbound. However, FKT attempts are often done Southbound to take advantage of an overall elevation loss of approx. 1040’.

Northville-Lake Placid Chapter of ADK – Dedicated to the preservation and promotion of one of New York's premier hiking trails. (nptrail.org) 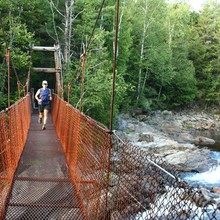 I am planning a Southbound women’s unsupported effort beginning at approximately 4 am on Saturday June 12th with a goal of completing by Monday June 14th at 4 pm for a total of 60 hours to best all current and historical unsupported efforts. This is attempt #2. Please send all the good mojo my way!!!!

That was a most excellent adventure and another epic failure on the books. Northville Placid Trail FKT attempt was a DNF. I did 103 miles in about 42 hours and it was glorious. The trail was wild and beautiful. I followed lots of moose tracks but didn’t see any. I was a little off the men’s fastest known time (there is no known unsupported women’s) so I decided to run through the night last night to catch up. At 2 am I got caught on trail in a fantastically close lightning storm and torrential downpour. I took cover on low ground tucked into a boulder, got into my emergency bivy and my sleeping bag inside of that. But it was raining rivers and soon everything was soaked. I started to become hypothermic so once the rain and lightning let up I headed back to the nearest road for a pick up. That was attempt number 2. I’m sure I’ll try again!

Headed out Friday September 3 around 6 am to attempt a SOBO unsupported effort with a goal of <60 hours to best all current and previous unsupported times. Third try, you know what they say! Track me here: https://share.garmin.com/saraniccoli