Granite Peak (12,799') is the highest peak in Montana. Lying deep within the rugged Beartooth Wilderness, it is surely one of the most difficult of the 50 state high points. All approaches to Granite are long and rough, largely off-trail above tree line, which is below 10,000' feet in this area. Also, the weather is notoriously poor and changes rapidly, as my brother and I found during an attempt on Granite in late August 2004 (see photo).

The fastest ascent time I have heard of for Granite Peak is by Sid Hayes in 2004. Here is Sid's complete report, which he emailed me on August 23, 2005:

I don't have a good idea of if my time is a speed record, it probably is not. The ascent time perhaps might be but not the round trip. It was my first ascent of this mountain so taking it easy was the way to go. The route was via Freeze [sic] to Death Plateau. The round trip record could be up to 2 hours faster, but I doubt, but few could do the ascent in 1:55 as I did 1 year ago. Started on the East Rosebud trail, ascended past Slough Lake to the plateau and across it to the summit ridge and block. I do not know if it is faster to take the West Rosebud approach to the plateau. Round trip time was 5:30 (down slower, as usual, than up) Any good mountain runner can beat this time (if they can climb the class 4 block near the summit). - Sid Hayes, August 23, 2005

Hayes RT time of 5h30m seems to have been the car-to-car FKT until recently. Below, Dan Kraft questions Hayes' ascent time based on a comparison to Matt Carpenter's Pikes Peak ascent record (the two routes cover similar distance, but Pikes has 1000+ feet more gain, while Granite is far more technical). I only report what people tell me about what they did, so anyone is free to make their own conclusion. I did check back with Hayes on this (10 years after our previous email exchange) - he stands by his time and has no further comment.

Though Sid's 5:30 total time seems possible, the ascent of 1:55 is a downright ridiculous number. The easiest way to think about this is with regard to the Pikes Peak Ascent. Granite and Pikes have almost the exact same specs, with about 13 miles of distance and 7700 vertical feet. Given, the altitude of Pikes is higher, but for its ascent, there is a road-like trail the entire route. On Granite Peak, you follow trail for 7 miles, then off trail across the plateau for 5 more miles, and then a final mile involving a huge amount of scrambling. Keep in mind that the Pikes Peak Ascent record is only 2:01, and done by Matt Carpenter, one of the greatest mountain runners of all time, in the prime of his career. 1:55 on Granite is a feat far beyond Matt's PPA record.

The fastest times are from Mystic Lake TH.  The Lady of the Lake approach and Southwest Ramp Climb route has become more popular and is described well in this Summit Post link: https://www.summitpost.org/southwest-couloir-route/160092.  The summit post link includes two approach variations (Aero Lake or Sky Top Creek) and two climb variations (SW Couloir or SW Ramp).  This route is unique because it allows you to climb the high point of Montana via a mostly 3rd class with a short section of 4th class scramble that does not necessitate the need for ropes as opposed to the 5th class climb at the top of the traditional approach.  It is about 25 miles RT, with 6500' of elevation gain. 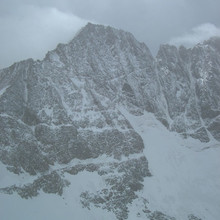 This route on the old FKT site
http://fastestknowntime.proboards.com/thread/51/granite-peak-mt

Hmmmm...Will Porter's 5h24m54s it totally believable (great work Will) and has data to back it up. However the Sid Hayes claimed 1h55m up is hard to believe, especially give the chosen route. The East Rosebud approach follows trail #17, the Phantom Creek Trail, gains about 3,900 feet in just over 7 miles to hit the saddle between Prairie View Mountain and Froze to Death Mountain. From there it is about 4.5 miles and 2,500 feet across a boulder filled froze to death plateau (rough and misleading - if you take a perfect line), then the climb actually begins. Here is the explanation of the actual climb: https://www.summitpost.org/south-face-via-east-ridge-standard/158752. I find it hard to believe 1h55m got an individual 7 trail miles (3,900'), 4.5 boulder field miles (2,500') and up a challenging class 4-5 climb that some of the best parties take an hour or more to scramble/climb from the Tempest/Granite saddle, especially solo on a first attempt. The route is physically challenging and route finding is difficult at best. The 1h55m time seems believable from camp along the plateau, but WOW car-to-summit in 1h55m ... The road half marathon record (about the same distance as Will Porter's route) is 58:23 that is at sea level and on a very flat course, so I guess humans can cover that much ground way faster, but having done multiple routes up Granite I can say that 1h55m would be beyond anything I have ever imagined as possible for even the most elite mountain runner. Sid, if you read your clock right and truly went car-to-summit in 1h55m, my hat is off to you, and I hope you did many other amazing mountain runs and made lots of money from sponsors and from winning races all over the world.

Not too impressive of a time, it can definitely be done much faster.  We were counting on supportable snow to make the off-trail sections in the upper basin easier to run, but rain and overcast skies the night previous made it punchy.  Had to proceed carefully as the postholes were crotch-deep and shin-scraping rocky. Also the countless rivers were high and swift, had to pick our crossings carefully.  The SW Ramp was climbed with ice axes and crampons.  Mixed ice, rock and snow made it interesting.  It's steeper and has more exposure than the Class 3 rating suggests.  Should have had snow pickets and simul-climbed it.

Gorgeous Independence Day on Granite though! Didn't see another soul (or bear) all day. Just a porcupine. According to the register, we were the first to summit this season?