Old Highway 92 from border to border in Iowa is a smooth, relatively safe, low trafficked route, nearly straight through our beautiful state. This path runs straight down 92 minus a couple short, scenic detours. It starts crossing one river and finishes crossing another, running just south of the center of the Iowa and passes directly through some gorgeous small towns. Included in these is Winterset, where the route passes near the famous Bridges of Madison County. Every inch of countryside and farmland is gorgeous (I can say from experience it never gets old). The elevation change is minimal but consistent with each rolling hill. It’s a truly authentic experience of Iowa. Through my research, I learned that Iowan ultra legend Bonnie Busch as well as my friend and ultra runner Danielle Wangsness have both used historic Highway 92 as their route for running across the state. For all of these reasons I chose it to be mine. I believe it’s likely the one most run so far, it is the ideal route to set for our state FKT, and I know it will be repeated in efforts to lower the time in the future (there is already one Iowan ultra runner who may make an attempt with my support in the coming years).

Admin note: Athletes are free to choose any legal route across the state between the western border and eastern border, running in either direction. The gpx provided is just one example. There is a separate north/south variation as well. 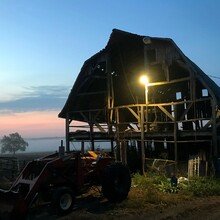 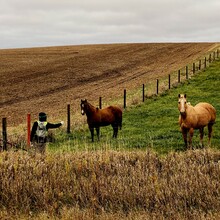 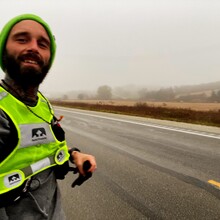 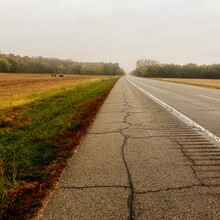 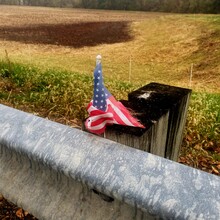 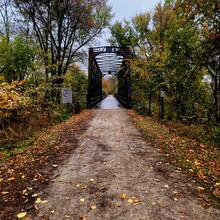 These are the athletes who I was able to find through my research had run across the state. Folks who inspire me deeply! (In chronological order)

•Patty Blackman and Jennifer Figge did their run crossing Iowa in the 1980s and published the book Running Home in 1989, I’m unsure of more details at this time but have ordered their book so I will share what I learn about their route!

•Iowan and ultra legend Bonnie Busch, ran across The state via Highway 92 which inspired my route. I was able to speak with Bonnie for a few hours about the experience leading up to mine. Though she had attempted a crossing in 1994 with big daily mileage. She went back in 1995 to complete a successful attempt. I believe she started with a bit over a marathon a day and increased daily mileage by at least a few miles during the run.

•In 2004 Danielle Wangsness covered a 339 mile route which included Highway 92, covering an average of 56 miles per day and finishing in 6 days. She did this with a friend who was biking alongside her and carried most of their supplies, they camped throughout the journey. Danielle is a good friend and training partner who was the main inspiration for this route choice and let me know about Bonnie’s trip as well.

•Steve Cannon also used a similar route in 2009, running from Council Bluffs to Muscatine, including some of Highway 92. He finished his run in 11 days.

•Joshua Jorgensen did a run across Iowa from Council Bluffs to Burlington in 2017. I believe in around 10 days or less, wearing a gas mask for veteran suicide awareness.

•Casey Patrick O’Connor ran with Ragbrai I believe in 2016

•Incredible ultra runner and huge inspiration to me, Pete Kostelnick (Iowan native) has run across the state three times. First when he was the initial person to run Ragbrai in 2013 (Council Bluffs to Ft Madison), second during his Transcon record in 2016 (Blair NE to Clinton, his fastest time in 112hrs), and finally during his run from Alaska to Florida in 2018 (Northwood through Quad Cities). Pete was kind enough to share information with me and I used his fastest time crossing (though it’s a different-incomparable route and his run was part of the larger Transcon effort) as what I needed to best to feel confident establishing the FKT for Iowa. I also let him know when I finished and that his support had meant a lot and he congratulated me, just the coolest guy. I set my goal at 108 hours and came in at 111:32:41, just under his time.

Thank you so much for the heads up and notes on your journey. Incredible work my friend ? I’m grateful to have this information and continue adding a few badass folks to our list. It’s really cool to have a comprehensive list and history going of running across our beautiful state

I have found another athlete (through the book Running Home by Paddy Blackman and Jennifer Figge- two across Iowa runners mentioned above), a woman named Dody Burkey who ran across the state in 1989, covering the distance in 12 days at about 25 miles per day! A cool addition to story of folks doing this run, Paddy and Jennifer seemed directly inspired by Dody’s run when planning theirs.

Dody’s run was in July, Paddy and Jennifer ran in September

What a great route!  I grew up on Hwy 92, and I'd say that was an excellent choice.

That’s awesome to know, I love that! It is such a great route. I love our state and 92 is the epitome of enjoying the Iowa landscape.