This it it!  49 people were Nominated from around the world, 51 experienced athletes voted (also worldwide), we've announced who the voters selected as the #5 and #4, and the #3 and #2 awardees, and now for the #1 winners.  Definitely click on the links - you want to listen to their surprise when we tell them, and read their stories in their own words.

Listen to Nika and John on the podcast. 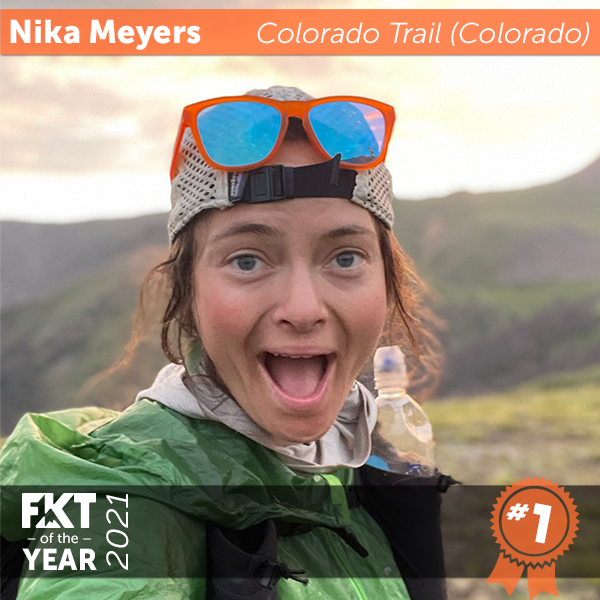 Voter Comments: "The Colorado Trail has shut down some great ultra-runners in recent years, amazing to see Nika move the self-supported mark within 4 hours of the supported record!!!"

"Nika Meyers threw down on the Long Trail last year, but the Colorado Trail showcased a next level approach to the trail. To finish in the time she did so close to various supported FKTs underscores just how special this run was."

"I know nothing about Nika, and thru-hikes generally don't get me very excited, but the CT is ultra-classic and she did it self-supported. That is HUGE on something as long as the CT."

"Over the past few years, the Colorado Trail has become a fascinating and competitive proving ground for FKTing of different kinds, and it seems contestants either nail their efforts or fully gas themselves. Nika Meyers's effort obviously was the latter."

Athlete Comments: "If you have a dream, go for it, because there will never be a perfect time. Be proud that you're going to take the risk."

Notes: First to go sub 60 hours on the UK's most competitive and famous long trail.

Voter Comments: "Pennine Way for the historic record and the back and forth with Hall."

"What John Kelly did on this route is remarkable given the distance, and a beautiful display of his focus and tenacity."

"John pushed himself into dark places in order to set the time; he has a unique ability to withstand extreme discomfort to achieve his goals."

Athlete Comments: "These trails have a huge history. And the level of support has been incredible; I love the community here. This is a team effort."

We always include this category at the end. This year I noticed our 6 staff people seemed to vote different than the majority, which was interesting, so I added up the staff vote.

THANK YOU for your participation!  This was very inspiring. Who or what at do you think will we be reviewing for FKTOY 2022?  Do YOU have any big plans?

Not sure how you justify putting John Kelly's effort ahead of new FKTs on the PCT and Via Alpina.  A 2.5 day effort is not in the same class as a two 30+ day efforts.

I don't find it so hard to explain: the Pennine Way is apparently an old, competitive record that is hard to improve, while the Via Alpina is nearly an OKT, and the PCT was surrounded by a fair amount of controversy around re-routing.  I was nominated for essentially an OKT, and while I'm proud of what I did, I recognize that it was just a pointer toward what should be possible.  I got several full nights' sleep in the Winds, which really isn't consistent with "maximum effort."

Some people value pushing the bounds of human performance more than just endurance.  One of my personal choices (I'm not a voter) that didn't make the final cut was Tyler Andrews' Cotopaxi climb, which improved upon Karl Egloff's blazingly-fast time by just 20 seconds.  It was basically a VK on a high-altitude glacier, a very impressive hour and a half.

Good call Sean.  Yes, longer is not necessarily better ("Bigger is better" is an odd concept to me, while America seems to gravitate toward it).

btw, your Wyoming 13ers was epic!  Unlike the CO or CA 14ers, few people know the WY 13ers well enough to understand how hard they are.  And this morning I had a wonderful convo with Tyler Andrews, so tune into a podcast with him releasing February 12.  It is one of our longest, as we just couldn't stop talking - he just set two FKTs on Aconcagua.

I know some of the voters are friends of Buzz or just other people who aren't familiar with FKTs or our community at all, but this is a bit much.

That's not a sentence I ever imagined would be posted here.

Thank you for the comment.  Understood.  Note that we strive for a wide range of voters - some are FKT holding thru-hikers themselves, while others are top racers - it's a big tent!  A group of people sharing the same viewpoint actually makes poor decisions; our voters have different backgrounds and views, which interestingly tends to  arrive at good community consensus.  And I don't edit - people can (and should) think whatever they want - what you read is what they said.  And FKTOY 2021 turned out to be heavily weighted toward the thru-hikes, as the 10 winners averaged a crazy-long 22 days per outing.

who cares what´s harder? the voters have voted, there is nothing to overthink here..