Mike Wagner originally submitted the Lower Gulch as an out and back. Jason Hardrath added the following information and variations:

"Grand Gulch is a truly unique, rugged, remote, historic area - it is a mostly dry, meandering canyon that runs about 50+ miles in length and that has a dozen named tributaries like Bullet, Shieks, Todie, Kane, Collins, and Cow Tank. It flows into the San Juan River, and is managed by the Bureau of Land Management (BLM) and National Park Service (NPS) as part of the Grand Gulch Wilderness Study Area. Most remarkably, on this FKT you will run past many Ancestral Puebloan cliff ruins and rock art.

Water is incredibly scarce in the gulch. Be prepared. Know the various exit canyons to bail out. Take emergency satellite communications. There really isn't much of a trail to follow. With all the switch backs and offshoot canyons one could easily end up, up the wrong way.

Finally, and perhaps most importantly, please “take only photographs and leave only footprints” in Cedar Mesa. The ecosystem is very sensitive, and the ruins and rock art even more so.

There are 3 route variations within Grand Gulch

1. "Kane to Collins" - this is the greatest one-way point-to-point length of Grand Gulch - ~40 miles

2. "Kane to Bullet" - this is a popular, shorter backpacking variation that hits the also historic Bullet Canyon. ~25 miles

3. "Lower Gulch, out and back" - this goes from Collins to the San Juan and back as the only way to effectively do the lower gulch. ~36 miles

Note: other variations of more minor canyons do exist but these are the well established classic thru-hikes of the gulch.

The lower gulch was previously submitted, by Mike Wagner, as its own route page, but in keeping with route pages like Buckskin - Paria, this format makes the most sense.

Mike Wagner originally posted this adventurous out & back route:

Mission accomplished! Though not a perfect effort. I got lost twice (as seen on Strava). I didn't drink nearly enough water. The route through the canyon is vague to non-existent.  Quicksand, cactus, crypto, strong winds, constant route finding, and when I started it was 35 degrees but when I finished it was 85 degrees.

In my opinion, this was one helluva effort. If I could hope for one outcome from this experience it's that someone else takes on the Lower Grand Gulch. It's a true southwest challenge. Not for the faint of heart or unprepared.

(Note that Mike shortcut the route some when he got lost and exited the canyon proper.  The route seems to be closer to 42 miles.) 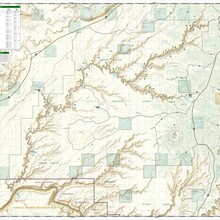 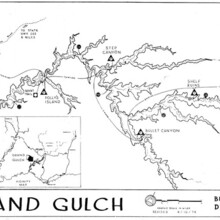 This route on the old FKT site
http://fastestknowntime.proboards.com/thread/1067/grand-gulch-plateau-utah

Excellent edit and improvement here compiling the variations in one place!

Thanks for your work! 👊