Glacier Point is a popular view point above Yosemite Valley. It can be accessed by car, or via the Four Mile Trail, which gains 3200' in 4.8 miles from the floor of Yosemite Valley. This trail roughly follows the route of an old toll trail that was completed in 1872.

There hasn't been a lot of FKT activity reported for the Four Mile Trail. On his speed climbing site, Bill Wright claimed the FKT at 1h9m (no date given), and attributed the women's FKT of 1h31m51s to "Rebecca" (Oct. 1999, "with medium pack").

This route now has a Strava segment.  But note that Strava can be off by many seconds, so it's best to post your actual time here.

Another option (submitted by Rory Beyer) is the old Ledge Trail:

The Ledge Trail is the shortest route between Yosemite Valley and Glacier Point, cutting along the otherwise sheer granite cliffs behind Curry Village. The historic trail was abandoned decades ago due to dangerous conditions and several deaths (as detailed in "Off the Ledge: Death in Yosemite."), however, remnants of old Park Service painted markings, signs, and granite steps remain scattered throughout the route.

The route begins directly behind Curry Village. After climbing up through wooded areas, you will eventually reach the Glacier Point wall, at which point you begin angling up and right along a wider-than-expected ledge that runs ~2/3 of the way up to the valley rim. Here, an obvious, slightly overgrown gully cuts up and left, taking you all the way to the rim. You can then continue upward to join the 4-mile trail, or cut straight to Glacier Point – you've done it!  The ascent from Curry Village is about 2.3 miles. Descend via the Four Mile Trail and run back to your starting point for an excellent tour. 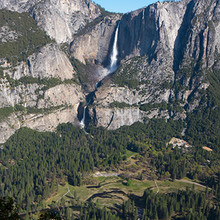 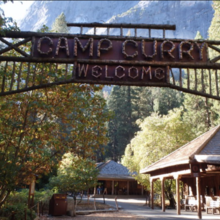 Why isn't this has a descent portion as well, just like the Half Dome FKT has an ascent and a descent?