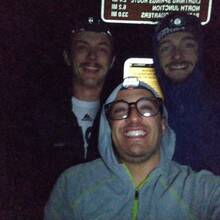 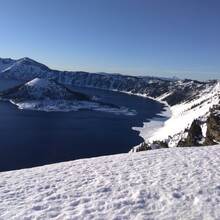 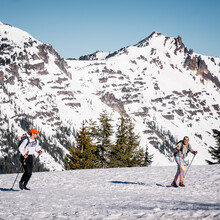 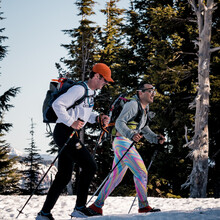 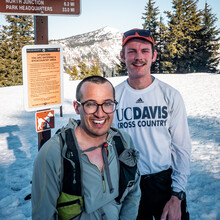 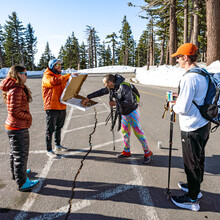 Three of us (Ben, Eric, David) started around 1 am, running clockwise from the “West Rim Ski Route” sign at Rim village. This entailed 3ish miles of downhill pavement running to meet the packs we stashed on the drive up. Here we began the snow travel, which was at times punchy but generally firm enough to run on without snowshoes. Around 10 miles in, David peeled off to run out to the Phantom Ship Overlook on his own and then doubled back to the car.

On the Northeast side of the lake we (Eric and Ben) hit some softer snow and deployed snowshoes. Within five minutes we hit a bare patch of pavement and put them back on our packs for the rest of the run. Much of the last half was too punchy to run but made for easy hiking in existing tracks. Jason Hardrath kept his snowshoes on for almost the whole go last week. It’s likely conditions improved quite a bit and we (Eric and Ben) don’t know how to use snowshoes efficiently.

A highlight of this experience was receiving beta and encouragement from Jason. He offered us gear the night before and met us with pizza and beers at the finish line. I’m not sure how he predicted our finishing time so well, but perhaps after 100+ FKTs some things just make sense. Thanks to Paul Wilson for letting us stay at his cabin and taking sweet finishing photos.

There’s joy in the unlikeliness of running on hardpack snow way out in the wild. However, the fastest way to do this route is on Nordic skis. We found this report from the winter of 1977:

John Day (in his 60’s) of Medford and the Italian Olympic ski team ski around the Rim in 6.5 hours.  The Italian team claims that the snow conditions were so perfect, that if they hadn’t had “Old John” with them, they could have done the 36 miles in 2.75 hours.  A snowmobile broke trail and set track ahead of the team. (Story related to Larry Smith by John Day while standing in Rim Village one winter morning.)