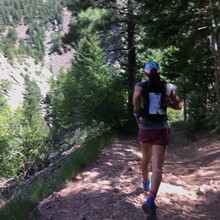 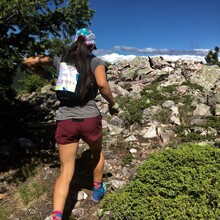 I began at the Linden Ave trailhead at 4:20 a.m. after warming up from a friend's house 1.7 miles away. It was odd running through neighborhoods at 4 in the morning and I actually felt safer and more comfortable once at the trailhead, ha! The eastern horizon was barely starting to show first light when I began, so I still needed a headlamp. I believe I summited Mt. Sanitas around the 28-minute mark. The moon was creeping towards the west and the east was beginning to glow a very deep red. No one else was up there, but sunrise is a popular time to be hiking in Boulder, so I wasn't surprised when I passed a few people on the way down. On the way up to Flagstaff, I passed a small fox and some gorgeous early-summer blooms. I didn't look at my watch when I crossed the Flagstaff summit but sunrise had already happened, so it was well after 6 a.m. (I took a video of the fox at 5:54 a.m. at the last road crossing before reaching the actual Flagstaff Summit Road). I made it to the Green Mountain summit around 6:45 a.m. (2h 25m). I reached the Bear Peak summit exactly an hour later, then South Boulder Peak at 8:04 a.m. (3h 44m). When I popped into the Eldorado Springs neighborhood from the old Mesa Trail (which is VERY overgrown right now and pretty much a bushwhack), I think my watch was at 4h 32m or so. I had my husband renew our Eldo state park pass the day before, so I had a receipt to show at the entrance for easy walk-in. At 4h 41m, I met my friend Emma up the road, just before the Rattlesnake Gulch trailhead. She had a mini re-supply for me (banana, root beer, extra water). I spent 5 minutes at her truck stretching a little and consuming sugar, ha. Then Emma joined me for Eldorado Mountain (had an off-trail permit for us), which we summited around 10:24 a.m. (6h 4m). The scramble down the ridge was very fluid and fun. The gully, however, is inescapably tedious and loose (both up and down), but we managed to make it down with only a few scrapes. All that was left was the rocky Rattlesnake Gulch trail, which we flew down. I almost took out a hiker! (I shouted "on your left" and she moved to her left...you know). But anyway, we made it back to the trailhead around 11:10 a.m. for a final time of 6h 49m 55s. The route is longer than it was in 2011, with total mileage now at 22-ish miles, mostly due to the re-route of the trail coming off of Green Mntn. I also have to mention that the entire run I had a "Black Lives Matter" sign pinned to the back of my vest. I wanted to take the opportunity to remind people on the trails that there is no avoiding or escaping the matter, or any manner of politics. Who we see on the trails is a direct result of our policymaking and implicit biases, and the "Boulder bubble," to be blunt, is real and it exists because of social inequality (won't dive into a rant here). SO, overall, this route is quite the challenge, with Eldo Mountain making all the difference (it's definitely the crux in my opinion, but so fun).