Via Alpina - red trail is a 2650K trail that goes through all Alpines countries.
The trace is fully specified and detailed on the official website of the trail:
http://www.via-alpina.org/en/page/237/l-itineraire-rouge 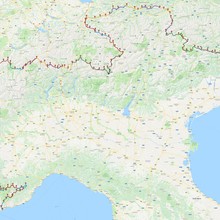 I will be going for the supported speed record of the Via Alpina Red. I will start running the 7th of July, and I'll go east to west like Guillaume Arthus, current record holder.

I aim for 85km a day, the daily average I was able to maintain on the Appalachian Trail as well.

My crew exists of Joren and my wife, and two good friends Henri and Klaas. There will also be a film crew following along.

Will post livetracking website as soon as it's available. As usual, I rely on Legends Tracking, and I'll be running with a tracker that saves my location every 2-4 minutes. With (any brand/type of) cell service, GPS locations get uploaded to the tracking site. If there is no cell service, GPS points get saved in the buffer and as soon as there's service again they get uploaded as well.

On the livetracking you will see virtually where Guillaume was during his record attempt at the time, based on his actual GPS data. Note that Guillaume went self-supported.