Charleston Peak loop in the Mount Charleston Wilderness portion of the Spring Mountains just NW of Las Vegas. It is such an obvious and natural peak loop (within 45 min of a major destination) that a lot of trail runners have done the loop (and blogged about the beauty of the Spring Mountains on the edge of the Mojave Desert). The legendary likes of Dave Mackey, Rickey Gates, & Karl Meltzer have all at various times mentioned running the beautiful Charleston Peak loop.

On at least 7-8 occasions over the last couple years of traveling to Las Vegas on business, I have tried to steal an extra half a day to run Mt Charleston. From my log books, my fastest time to date is 4h 11m, which included several brief stops along the way to take photos of the fantastic vistas, the bristlecone pines, or the incredible wildflowers. I am fairly certain I can break 4h on the loop, and an elite trail runner could probably go under 3h 30m. This Sunday morning, 16 Sep, I plan to run the loop hard and document/establish a “First” Known Time. Although I’ve read a lot of posts about the 17-18 mile loop (by some pretty fast mountain runners!), I am yet to see anyone post their time for the loop. I have little expectation that my “First” Known Time will long remain the FKT, but I hope that posting the loop information here will increase awareness of a true trail gem outside of Vegas.

The loop, as I like to run it, starts from the Trail Canyon TH (7800 ft). It joins with the North Loop Trail at the 9331 ft saddle, then passes Devil’s Thumb enroute to Charleston Peak (11,918 ft). Depending on which trail map (and which GPS device) you reference, distance to the peak is from 8 to 8 ¼ miles (ascending under 2h is easily obtainable). The loop then follows the South Loop Trail to the 10,700 ft saddle just before Harris Peak, then drops into the unnamed canyon that opens up just east of Echo Cliffs. The South Loop trail used to end at the Cathedral Rock Picnic area which is currently closed while it undergoes extensive renovation. There is a new trail that joins to the Cathedral Rock Trail, which then links to the Echo Canyon Trail. The Echo Canyon TH (7600 ft) is just over a ¼ mile down the road from the Trail Canyon TH. Total loop is between 17.5 and 18 mi (again depending on the map or the Garmin).

There is now a nice, newly constructed single track that links the Echo Canyon, Cathedral Rock, and South Loop trails together. This eliminates all running on any roads with the exception of the very short 1/4 mi along Echo Canyon Rd between the Echo Canyon and Trail Canyon THs.

I run and time the loop from the Trail Canyon TH back to the same TH.

I intend to post a map from my Ambit route after the run on Sunday. Attached is a Google Earth view of the loop from earlier this summer (from Garmin 305 data).

I am always amazed by the contrast between the Mt Charleston Wilderness and the desert surrounding Las Vegas (sometimes beautiful in its own way, but quite different). Since most folks find themselves in Las Vegas at some time or another, I hope that the kindred spirits of wild running get the opportunity to enjoy the Charleston Peak loop. (And please, someone throw down a wicked fast and smash the modest FKT I plan for this weekend--it won’t be that much of a challenge!) 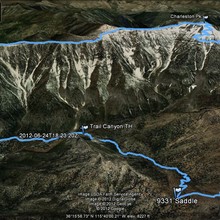 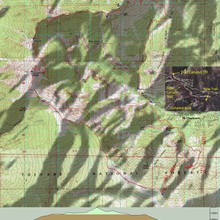 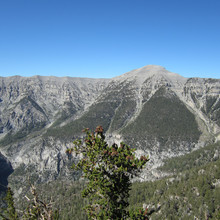