Modeled after the renowned Grand Canyon Crossings FKT route, this is a "Rim-to-Rim-to-Rim" style effort right through the heart of the Badwater Basin within the infamously rugged and unforgiving terrain of Death Valley National Park.  Taking the attempter as high as 11,043' above sea level and across the lowest point in North America at 282 feet below sea level, this route creates an equally brutal logistical challenge to the hopeful finisher by forcing one to face difficult, off-trail terrain with very short daylight hours or to potentially endure brutal heat during the day in hopes of less darkness.

This was a route that Buzz Burrell passed on to me (Jason Hardrath) as something he had thought up but never done, after I made a failed attempt at the 167 mile Death Valley N-S Crossing in 2019.  Buzz proposed that a one way R2R crossing should start from the Telescope Peak Trailhead, run up and tag the peak at 11,043' above sea level before running down the gritty-yet-oft-attempted "Shorty's Well to Telescope Peak" route to -262', then continuing across the Badwater Basin itself at 282' below sea level, until climbing some class 3-4 up the Black Mountains on the other side, up to Dante's View Trailhead at 5,475' above sea level. See the second GPX file for this one way route.

I was enamored with the challenge of the terrain, the timing of the effort with weather, seasons (how does one account for both 11k' and -282'?), and daylight hours...but I found myself more drawn to the double crossing or R2R2R variation as it forced uphill and downhill travel on both the Panamint and Black Mountain ranges.  For this variation it seemed ridiculous to make the attempter tag the trailhead for Telescope Peak, opting for the summit to be the turn around point of the route thereby allowing it to follow the "Shorty's Well to Telescope Peak" route up and down the Panamint side (which is already legendary in its own right). You see this R2R2R reflected in the first GPX file and map. Attaining both rims of this route is going to be a gritty scrambling experience.

For the R2R2R, it would be acceptable to choose a starting point at either of the route road intersections in the basin (Badwater Road or West Side Road) or start from the described Dante's View start. Regardless, photos with the Dante's View sign on the one rim, the Badwater Basin Sign at the bottom, and with the summit sign/box on Telescope Peak should be included in conjunction with your gps tracking. It seems reasonable for the style to strongly consider self-supported or supported options due to these road crossings to keep weight off your back for the loose and scrambly nature of the rather significant climbs on either side of the basin.

Submitted by Jason Hardrath (Follow on IG or FB) 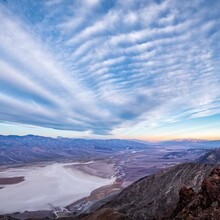 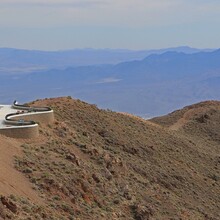 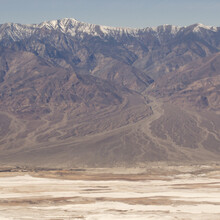 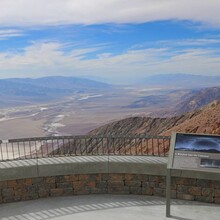 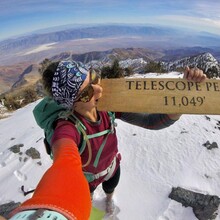 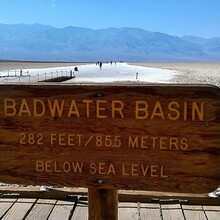 Very cool to see this posted!  A similar thought briefly passed through my head when I went for the Telescope Peak fkt a few weeks ago, but to bike up and back to Dante's View from badwater basin then do the Shorty's Well route.  Hadn't even considered climbing up/down the west side of the Black Mountains, but this would be an awesome day out.