The Grand Canal is the older of the two inland waterways that were built to link Ireland’s capital, Dublin, to Ireland’s longest river, the River Shannon, in the midlands. Built between 1756 and 1804, the Grand Canal starts on the south side of the River Liffey at Grand Canal Dock in Dublin’s Docklands and heads west along what is known as the Circular Line where it joins the main line at Suir Road. From there the canal continues west out of Dublin, passing through County Kildare before crossing the width of County Offaly where it joins the River Shannon at the village of Shannon Harbour. The other canal, the Royal Canal is an established FKT route that can be viewed at https://fastestknowntime.com/route/royal-canal-ireland.

The Grand Canal Main Line (including the Circular Line which links it to the River Liffey) is 131km (81 miles) in length from the Sea Locks at Grand Canal Dock in Dublin to the Lock 36 in Shannon Harbour. The Main Line used to terminate at James’s Street Harbour, however that line was filled in after the closing of the canal to commercial traffic in 1960 and like the Royal Canal on the north of the city, the start/finish is now accepted as the Sea Lock with the River Liffey. The entire route follows the way-marked Grand Canal Way along what was the canal’s towpath which horses would have used to pull the barges. The Grand Canal Way is in public ownership and no permits are required to travel along the route.

The Grand Canal Way is made up of a variety of surfaces including tarmac and paths in the more urban areas, dust cover compacted stone and rural roads as well as several stretches of grassy trails which can be soft and muddy underfoot. The route is predominantly flat with a slight rise up the locks from either direction to a summit level in County Kildare before dropping back down to the river level on the other side.

Once out of Dublin, the canal passes mostly through rural landscapes and bog lands with several small villages along the way where it is possible to get supplies by taking small diversions off the route. The canal also passes through the urban centres of Sallins and Tullamore. Several branch lines also divert off the main line to the towns of Naas, Edenderry and Kilbeggan.

Further information about the canal, including history, navigational and surface information can be found on the Royal Canal Runner website at https://royalcanalrunner.com/grand-canal-guides/ or by checking the Wikipedia page for the Grand Canal at https://en.wikipedia.org/wiki/Grand_Canal_(Ireland) 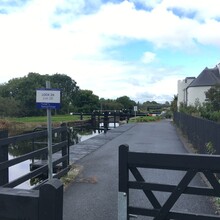 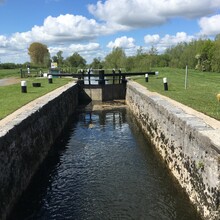 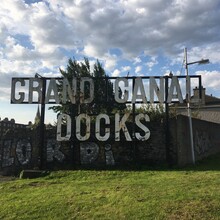 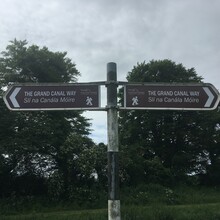 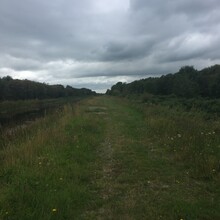 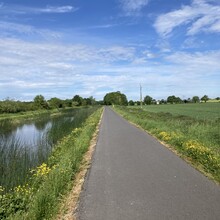