There are basically two different corridors that people use to cross the Grand Canyon. This route connects both of those routes to form one large loop.

The standard corridor crossing (North Kaibab Trail with either the South Kaibab or Bright Angel Trails) is one of the most scenic and competitive FKTs anywhere. These trails are also very popular and during the busy season can be crowded with hikers, runners and mules. For this reason Peter Bakwin, Buzz Burrell and Charles Corfield created the Rim to Rim to Rim Alt route. They wrote about their experience in this article. Jamil Coury also made a great video of the Alt route following Tim Freriks, Eric Sensemen and Jim Walmsley.

The loop itself is roughly 97 miles long (I ended up with 101 miles on my watch) with 16,000 feet of elevation gain, though different routes are possible as long as you cross once on the Bass Trail and once via the standard route. The crux of this route, mentally at least, is the river crossing. There is no bridge between the South and North Bass trails. Many methods have been used to cross. Some have swam with a combination of wetsuits, fins and webbed gloves (or no clothes at all), some have packrafted, and others have waited for a passing group of whitewater rafters to hitch a ride across. A life jacket might not be a bad idea due to strong currents between the Bass and Shinumo Rapids.

You can start anywhere on the loop but the most convenient places are probably the North Kaibab or Bright Angel Trailheads, although the North and South Bass or South Kaibab Trailheads may offer certain logistical advantages. If you sleep in the national park itself you need a permit. National forest on each side of the canyon may provide dispersed camping options. There is no easy time of year to do this loop, though September/October may be somewhat safer. Most FKTs on the alt route have been set from October to December. The North Bass Trail seems to be more overgrown in spring. This loop (or the standard R2R2R for that matter) probably shouldn’t be attempted in summer, although going when Highway 67 on the North Rim is open to vehicles (generally May 15-end of November) can make a bailout easier. Parts of the North Rim may be accessible via forest roads before May 15. On my first failed attempt I had 6 liters of water carrying capacity and that still wasn’t really enough. The most difficult water carry would likely be leaving Bass Rapids in the counterclockwise direction. 30 mile waterless stretches are possible. Water caches or support from others can help shorten these.

Please be careful. Rim to Rim to Rim in the Grand Canyon is a classic route through some of the best scenery on earth. It is near the top of the list for most hardcore trail runners. The standard crossing carries a level of risk that many are aware of. 100s of (mostly unprepared) people each summer get in over their heads, but even experienced runners sometimes end up needing to be rescued. The alt crossing and areas between the two crossings on the rim may not see people for weeks. You should have extensive experience in the Canyon before even considering attempting this. Tell someone where you're going, bring a satellite messenger and know your water sources.

Thanks to Peter and Buzz for their help in pioneering the R2R2R alt route, and offering up some good beta for this crazy loop. Peter suggested calling it the “KaiBass R2R2R.” Maybe that name will catch on. Thanks too to Peter, Buzz and Jeff for giving the FKT community a place to document our adventures, and for their relentless work on the website over the past several years. You will be missed. 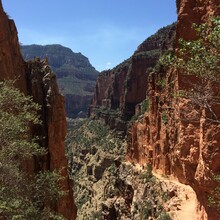 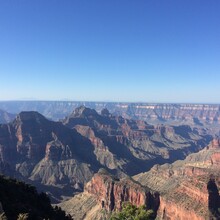 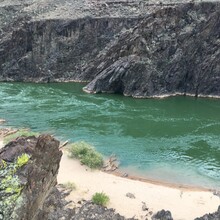 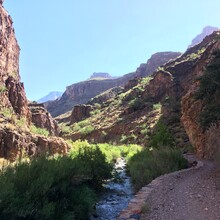 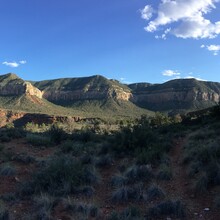 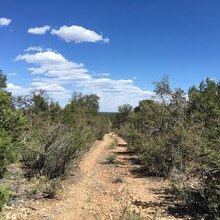