Ishpatina Ridge is the highest point of land in the Canadian province of Ontario, at an estimated 693 m (2,274 ft) above sea level. Ishpatina Ridge rises approximately 300 m (984 ft) above the immediate area. It was only truly recognized as Ontario's highest point after topographical mapping by the Government of Canada revealed this fact in the 1970s. Before then, the more popular Maple Mountain was thought to be higher.

The ridge lies in Lady Evelyn-Smoothwater Provincial Park. Due to its remote location, Ishpatina Ridge is a challenge to reach. The closest major highway, Highway 560, is more than 30 km north. There are a few logging roads and trails in the remote area, but they are difficult to travel in poor weather. The most popular approach route to Ishpatina is by canoe/portage via a logging road to the south out of the town of Capreol north of Sudbury. While a northern route exists (out of Gowganda, the nearest community), there are numerous portages making it particularly onerous. This route has traditionally been used for a winter-time approach by ski/snowshoe. Historically, a fire tower atop the ridge was staffed by forest workers and they would have been ferried to the site by float plane.

The name "Ishpatina" comes from an Ojibwe language word ishpadinaa, meaning "high place/ridge". Spadina Avenue in Toronto and the city of Ishpeming, Michigan derive their names from the same word.

An abandoned firetower, often referred to as the Ellis Tower, is still standing on the highest section of the Ridge (left). The original tower was an 80 ft structure erected in 1930. The successor, currently standing, is 100 ft high and was abandoned in the 1960s. The towerman would have resided in a cabin on the shore of Scarecrow Lake and would have hiked a 3.5 km trail daily taking approximately two hours to the summit and a little over one hour to descend again.

One of the coolest aspects of this trail is how remote of an FKT it is for Ontario. Most people that summit Ispatina Ridge get to the start of the trail via canoe. Another option though is to drive and take 2 hours of logging roads off of the highway. From there you can choose to move by foot or bike for about 7 km until the trail gets to be more of a bushwhack marked by flagging tape(Scarecrow Trail). From here by foot it's another 5 km to the start of the Tower Trail. To get to the actual start of the FKT, follow Scarecrow Trail past the campsite until you reach the blue hiking marker and moose crossing sign(see picture). This is on the edge of the north side of Scarecrow Lake. The Tower Trail from the start to summit(fire tower) is well maintained due to foot traffic. This FKT is an OUT AND BACK. At the top, touch the fire tower then descend back to the start.

The above link is a great resource which includes a detailed map. There's also a few YouTube videos that give you an idea of what this adventure will be like. 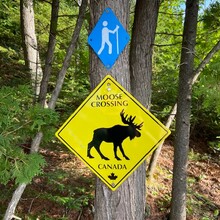 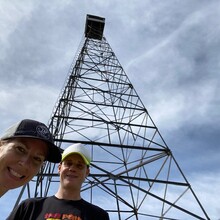 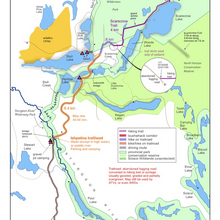