Standing tall and imposing above Mirror and Crater Lakes is Lone Eagle Peak, one of Colorado's most iconic mountains.

This route takes the popular Cascade Creek approach (the shortest and most direct path to the base of Lone Eagle) and then the classic Solo Flight (4th Class) route to the summit of Lone Eagle.

This route begins at the Monarch Trailhead, specifically at the metal gate that blocks motor vehicle access where the trail begins. This route goes to the summit of Lone Eagle and returns the same way. The summit is actually not the highest point, but the northern point on the ridge. It's hard to mistake the summit, but there is a summit register there for confirmation. The typical Solo Flight route ends with a walk 30 feet or so North along the summit ridge to the most spectacular point, the "summit."

The Cascade Creek trail to Crater Lake is about 7 miles of moderate terrain with mild elevation gain. Solo Flight is a steep climb out of Crater Lake, 2.4 miles according to Gerry Roach.

The Cascade Creek trail is known for its waterfalls and wildflowers. Runners, hikers, climbers, and horseback riders will pass several spectacular waterfalls on their way to Mirror and Crater Lakes.

Mirror Lake is named so for it's clear reflection of Lone Eagle peak and the Lone Eagle Cirque. Crater Lake is just above, is larger, and the northwest shore is abundant in wildflowers. There are several campsites and the permits are in high demand.

Solo Flight itself is abundant in Colorado Columbine. The route is deemed a "classic" in Gerry Roach's "Colorado Indian Peaks." The route climbs south under the peak's east face and offers a view of the very turquoise, Triangle Lake before turning and approaching the summit. On the way there is interesting traversing and the crux is a 4th class downclimb.

Solo Flight is also described in Dave Coopers "Colorado Scrambles" where he instructs the reader to approach from the Monarch Trailhead, the same as this FKT route. 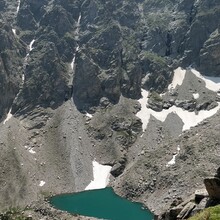 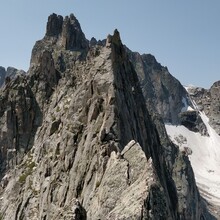 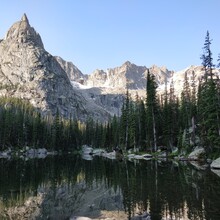 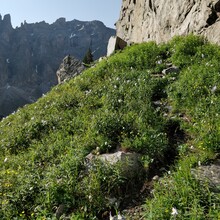