Mt Defiance is the highest point along the Columbia River Gorge. The parking lot is at a mere 130’ above sea level, but the summit is at nearly 5000’. With the easy accessibility right of the freeway, lots of runners and hikers use the Mt Defiance trail to get a long, mostly pretty steady climb. On a clear day the summit provides excellent views of Mt Hood to the south. Although snow can stay until well into June, it is popular enough that there are often tracks you can follow to the top during the shoulder seasons.

The route is up and down by the Mt Defiance Trail, which should be the quickest route. There are a couple of trails and a road that lead to the summit. If you are able to beat the existing FKT by taking a slightly different route at the top, for example following the road for the last ¼ mile, that is acceptable. Oregon hikers has a very detailed description of the route here. Tom Ferrell was the first to describe the route start and summit in his FKT write up. Tom says he started at a trail sign on the west end of the parking lot. The current trail sign does not seem like it is on the west end to me, but to eliminate any ambiguity, I provided a photo of the current trail sign to be used as a start for all variations and a finish for the round trip. I also provided a photo of the summit, namely the propane tank on the south side of the fence around the radio towers. (Nothing like a sexy, sexy propane tank for your big finish!)

The poison oak population is quite healthy in the lower elevations, as it is in most of the Gorge. It doesn’t usually hang over the Mt Defiance Trail and is usually avoidable there. If you were to descend via the Starvation Ridge Trail, poison oak tends to grow over and across the trail and is much harder to avoid.

There are Strava segments for both the ascent and round trip. 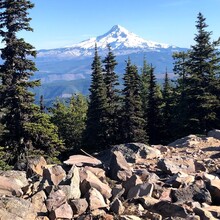 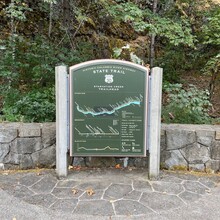 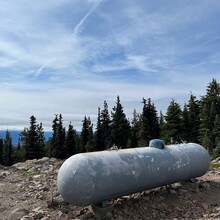 This route on the old FKT site
http://fastestknowntime.proboards.com/thread/1073/mount-defiance-columbia-river…