Identified in Beckey’s Cascade Alpine Guide Vol. 3 as the highest peak in the Methow Mountains, and one of the two highest summits in the Lake Chelan-Sawtooth Wilderness, gentle giant Oval Peak (8795') stands at No. 28 on the Bulger’s List of Washington’s highest peaks. Oval offers its climbers a challenging, non-technical ascent and rewards them with spectacular views south to the Sawtooth Mountains, north to the Gardners and Washington Pass peaks and west across Lake Chelan to the Chelan Mountains.

This is an out-and-back route, starting and ending at the West Buttermilk Trailhead, accessed via the Twisp River Road, west of the town of Twisp, Washington, in Okanogan County. From the trailhead at 3960 ft., the well-maintained trail crosses West Fork Buttermilk Creek once early on (possible high water in early season) and gently gains about 1900 ft. in the first 4.7 miles. The route then leaves the trail, turning northwest, cross country and steeply uphill, gaining another 1000 ft. in .7 miles. Staying on the ridge to the south (climber’s left) of the creek flowing out of the lake above avoids thicker brush along the creek, with manageable blowdowns to navigate. From the scenic, unnamed lake just below 7000 ft., the route follows open country further northwest, gaining Oval’s South Ridge at about 7800 ft. Scrambling over and amongst furniture-sized boulders (which only occasionally shift with a resounding, disconcerting thunk) brings you to Oval’s summit and its rewarding views. The descent is via the same route.

Although Oval is generally ovoid in shape and boasts the drier and sunnier weather of the east side of the Cascades, this route nonetheless features plenty of loose rock in the last 1300 ft. before the summit and, in early season, some modest potential for avalanche.  As with most meaningful Cascade peaks, in early season, an ice axe and crampons may be necessary or at least advisable. 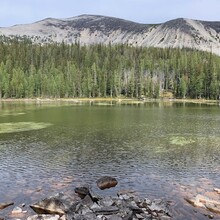 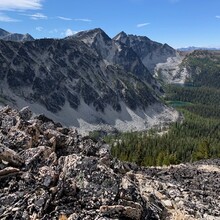 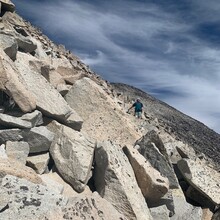