The Palmetto Trail, a gift to South Carolina to encourage and inspire active, outdoor recreation, land conservation, and preservation of historical and cultural landmarks.

Established in 1994 the Palmetto Trail provides access to the outdoors from Walhalla in the Blue Ridge Mountains to Awendaw on the Intracoastal Waterway. It is South Carolina’s longest pedestrian and bicycle trail and the largest trail construction project (approximately 500 miles when completed). It has also been designated a federal Millennium Legacy Trail.

The passages are accessible for day trips, weekend jaunts, and longer treks, including thru-hikes. An ongoing ‘Finish the Trail’ campaign is in progress to complete the remaining unfinished 150 miles in the Midlands and Upstate. The entire Palmetto Trail is open to hiking and backpacking. Designated passages and sites are available for mountain biking, horseback riding, and camping. The Trail cannot accommodate motorized vehicles.

Residents and visitors of all ages, abilities, and socioeconomic circumstances use the Palmetto Trail to enjoy nature, practice conservation, and learn history—all while being physically active. Traveled individually or together, the passages reveal the rich diversity and fascinating history, culture, and geography of the Palmetto State.
- Adapted from https://palmettoconservation.org/, Dec 2021

This route uses official passages on completed trail sections as much as possible and utilizes public roads to connect unfinished sections in order to create a continuous footpath. Several of the existing passages create side loops off of the main Palmetto Trail. These passages are not included in this route and include: USC Upstate Passage, Blackstock Battlefield, and Lynch's Woods.

Additionally some passages are not included in their entirety in order to maintain a continuous footpath that does not double-back on itself. Efforts were taken to include as much of each official passage as possible.

Lastly this route also requires alternate transportation over the 301 bridge in the Lake Marion Passage as it is closed to foot traffic. According to the SCDOT: "The 301 bridge will be closed indefinitely beginning August 1, 2017. For more information and updates, please see the SCDOT website at http://www.dot.state.sc.us/"

The distance across the bridge is 3.75 miles if shuttling from the Enmarket Convenience Store in the north [33°31'34.1"N 80°25'48.3"W] to the corner of Bass Dr & Old Highway 6 (Highway 15) in the south [33°29'15.9"N 80°28'34.0"W]. Obviously, since the bridge is closed to pedestrians, you do not have to walk across (unless that changes).  Therefore, FKTs are likely to be self supported or supported, depending on how you organize transportation across (e.g., if you get an Uber it's self supported, if your friend drives you it is supported). 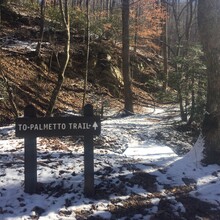 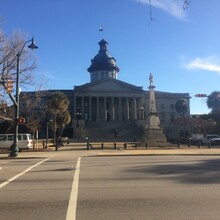 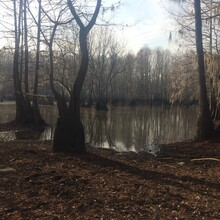 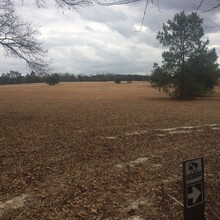 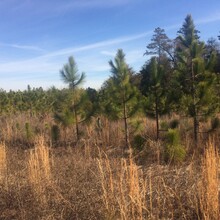 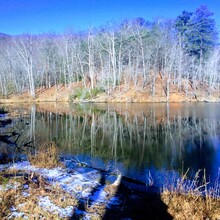 This Sunday 12/05/21 at 5am I will be starting a supported thru-hike of the Palmetto Trail route from west to east. My goal is to complete the entire route in 10 days. I will be supported by my partner in a vehicle who will provide food, water, and carry shelter.

I also plan to document using photos and a trail journal that I will submit at the conclusion of the hike. Time allowing I will make posts on instagram @marathontreks.

The Palmetto Trail is very special to me. While I was living in South Carolina in 2018 this route was my first attempt at thru-hiking without complete trail information. Sections had to be connected together, town information researched, and I had to find creative camping solutions. I am incredibly excited to be returning to this route once again and my hope is that others will follow and help make the Palmetto Trail a thru-hiking destination!

On December 16 I completed the Palmetto Trail route. Total elapsed time was 11 days, 15 hours, and 36 min. Longer than my initial goal of 10 days but still super excited to have completed the route. I am traveling for the next few days but will provide a full trip report, photos, and gpx track for verification as soon as possible.

Is there another GPX file for this route? I've downloaded the current file and it seems to be corrupted.

I just tested the gpx file and it seems to be working for me in both Gaia and https://gpx.studio/. Maybe an issue with the software you are using to view the file?

Not sure if this is helpful but I also have the route saved as a custom route in Google Maps. https://www.google.com/maps/d/edit?mid=1CN_i4-rnqL2HdGfqx4xwSVWX1h5PJPVL&usp=sharing