The Prescott-Russell Recreational Trail is a 72-km long rail trail crossing the United Counties of Prescott -Russell. The trail begins in the village of Saint-Eugène, ON and goes to the eastern boundary of the City of Ottawa at Caanan Road.  The trail passes through the Townships of East Hawkesbury, Champlain, The Nation, Alfred and Plantagenet, and Clarence-Rockland. The trail primarily passes through farmland, with some forested sections. The Trail runs along a railway right-of-way making it extremely flat. The trail surface is mainly stone dust, although it is paved near population centres. Notable sights along the trail include the former railway station in Bourget and the bridge over the South Nation River near Plantagenet. Signs are along the route showing points of historical and natural significance. Pavilions are located along the trail in Saint-Eugène, Vankleek Hill, Plantagenet, Bourget, and Hammond.

The trail then continues on to the Prescott -Russell Trail Link, which is a 26 km extension of the trail crossing through the eastern section of Ottawa following the same railway right-of-way.  It goes from the western end of the Prescott-Russell trail at the eastern border of the Ottawa, passing near Navan and Orleans before ending in a dead end near Highway 417.

The 98 km FKT route of both sections run from the dead end near Highway 417, 2 km west of the Anderson Road parking lot in Ottawa, ON and ends near the Quebec-Ontario boarder at Montee la Grande, in St. Euguene, ON.

(NOTE 11/11/2020):  As of December 31 this trail will no longer be the responsibility of the United Counties of Prescott and Russell. The owner of the trail is Via Rail.  At that time, access to and maintenance of the trail may change. 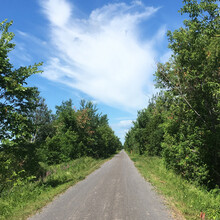 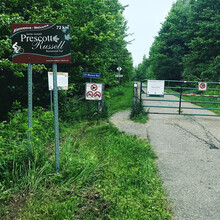 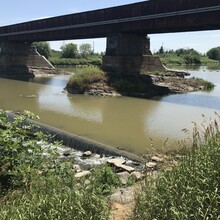