This route follows the official city limits of the city of Toronto, as close as possible. Toronto is the largest city in Canada. The route features sidewalks, multi-use/bike paths, sandy beach, and even some trails.

The route starts at the foot of Yonge Street -- the "longest street in the world" -- on the lakefront of Lake Ontario. From there the route moves east along the waterfront to Rouge National Park, where the route goes north on forest trails in the national park. The rote then turns westward along Steeles Ave, which is the northern border of the city, for approximately a full marathon, before heading south on a mixture of park paths and roads to reach Lake Ontario once again. Then eastward along the Waterfront Trail to the foot of Yonge Street.

Approximately 135km around the perimeter of Toronto, mostly sidewalks and paved park paths, but some trail, gravel, boardwalk, and even beach surfaces are included. While most of the route is with the Toronto city limits, you will also spend some time in Pickering, Brampton, and Mississauga! The route starts and finishes at the foot of Yonge Street at Lake Ontario, heading east in a counter-clockwise direction. The route is divided into 6 segments.

Starting at the foot of Yonge, moving east along the Martin Goodman Trail (paved multi-use), continue through the port lands past Cherry Beach, but not going into Tommy Thompson, back on MG to the boardwalk in The Beach, continue to the Water treatment plant then, work up towards Kingston Road towards Scarborough Bluffs, then back up to Kingston road briefly before going down Doris McCathy Trail (mostly hard packed gravel) to the Lake then eastward. Then a **3K beach section over mostly sand and some bouldering**, before hitting pavement of the Waterfront Trail, which goes the remainder of the way to Rouge Beach.

- Gas Station at the 22K mark, before descending DM Trail

Segment A on Strava

From Rouge Beach, cross the river bridge and take the into some residential streets of Pickering, leading under the 401 to Kingston Road. Then west on Kingston road over the Rouge river to the entrance of the Rouge National Park. Trails begin here, winding north towards Finch Ave, then west to Scarborough/Pickering Townline then a few km north to Steeles.

Segment B on Strava

From Steeles & Scarborough/Pickering Townline, heading west to Steeles & Yonge. The first 5km go past mostly farmland, soft shoulder with no sidewalks for the first 6-7km. After that Steeles widens to at least 4 lanes, with sidewalk on at least one side, getting more commercial and residential.

Yes, Steeles Ave is the longest street in Toronto. It continues west from Yonge Street until it hits the western border of the city at Highway 427. This is a mostly commercial, 100% sidewalk, with a few green patches as the route passes rivers and York University. Not pretty, but plenty of places to refuel along the way. The route continues 700m past the 427 to Albion Road, dipping briefly into Brampton.

From Steeles Ave, head south on Albion Road for a very short distance, on the sidewalk on the right side of the street. There is a grassy field to you right with a fence. When you get even with the large billboard in the field, turn right towards the billboard and you will see a gap in the fence. Enter and follow a short grassy trail for 20m to the old pavement of Indian Line Road, which has been closed to vehicles for many years. After passing over the Claireville Dam, turn left onto the PanAm / W. Humber Recreational Trail. Exit the trail just after the second underpass at Humberwood. Follow it south (left) until Rexdale Blvd. Cross to the south side and just to your right take the pedestrian only path/road for a few hundred metres to Grandstand Entrance Road at Woodbine Racetrack. Follow it around the racetrack property -- enjoying the smell of wet hay in the stables -- until turning right at Carlingview Dr (underpass to the right). South for 3km through “airport industrial” section then turn right at Renforth Dr. About 1km later turn right on Eglinton - there is a multi-use/bike path on the north side of Eglinton which runs for 3km until reaching Etobicoke Creek, trail entrance on the south side of Eglinton, east side of the creek. Follow the multi-use path south, crossing the creek into Mississauga, before being forced onto Ponytail Drive (there is a golf course on the creek south of here). Turn left on Ponytail and then first left onto Bridgewood drive, down to Bloor St. Go 100m west on Bloor and then south into a hydro corridor, which runs for 1km south to Dundas. Dundas west to Dixie Rd and then Dixie south to Sherway Drive. Go left on Sherway Drive which ends in a pedestrian trail and bridge over the creek (back in Toronto!). The QEW underpass is definitely under construction, but passable by pedestrians and no workers present on Saturdays. South of the QEW, it is solid multi-use path along the creek, with option single track bits running parallel, eventually landing on the beach and tiny boardwalk of Marie Curtis Park.

From Marie Curtis Park going east along the lake to Yonge & Queens Quay. The first 6km is through streets and small parks, then onto the waterfront multi-use path for most of the remainder, with a few spots where dirt or boardwalk are preferred to provide small breaks from the pavement. 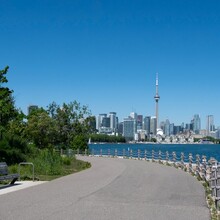 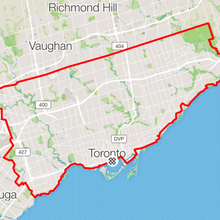