The Triple Crown consists of the Big Three National Scenic Trails:  The Appalachian Trail, the Pacific Crest Trail and the Continental Divide Trail.  Completing the Triple Crown requires about 7,900 miles of hiking through 22 US States.  As of the end of 2018, about 400 people are acknowledged to have completed the Triple Crown.  The Calendar Triple Crown (all three in one calendar year) was first done by Flyin' Brian Robinson, in about 300 days between January 1 and October 29, 2001, a feat which has been repeated only five times (as of November 2018).  The trails can be hiked in any order, and can be broken into segments, as long as the full length of each trail is covered.

Note on "style":  The Calendar Triple has always been done in typical thru-hiker style, which we term "self-supported".  However, on such a long hike, most people will receive some support by family and friends from time to time; we generally consider these trips to have still been "self-supported".  If the support is planned and meaningful, the hike will be considered "supported".

Note on distances:  The current AT mile mileage is listed as 2,189, the PCT 2,655, and the CDT is estimated at 3,100, for a total of 7,944 miles.  The AT and PCT have clearly designated routes which must be followed for an FKT; however, the official governing body's can change the route at any time, which then becomes the new official route and distance.  The CDT has never had a clearly designated route, which is why FKT's have not been considered meaningful on that Trail. 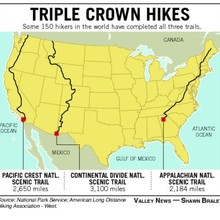 Looks like this guy completes the triple crown in 236 days!  His resume seems legit, so insane!  https://www.thehikinglife.com/12-long-walks/map-stats-journals/

Hello all, I will be attempting the calendar triple this year (2022).  My main goal is to do just that with an aspiration to be the fastest person. I will be attempting each trail fully and individually before moving to the next, hopefully not breaking them into sections. I am currently 470 miles into the AT going northbound. I'll then be moving to the CDT northbound, and finishing with the PCT southbound. The decision to southbound the PCT last is mostly due to poor planning but partially because of the deceptively high snow in early winter in California. Since then, the winter has been lackluster but I will likely be sticking with the permit I have and roll the dice with fires.

In terms of style, I will be going self-supported, but full opportunist, meaning I will do anything a normal thru-hiker would have access to.  I will absolutely be taking any trail magic, I will be hitching into towns when possible, and I will accept any random/non-planned help I recieve.

I will have tracking of the entire effort via garmin inreach and suunto GPS that I will log here ( https://share.garmin.com/6S3NQ ) and update when I can on strava.

Exciting! Regional Editors: can we add this to the "tracking now" page?