This is a (mostly) well-marked ~8 mile loop that interweaves some of the Northern portion of RI's North South Trail. Follow orange blazes in either direction from the George Washington Campground's Parking area and bathroom facility (drive through the campground until you see a large bathroom building on your left and a pond beyond it down the hill). This parking area will put you directly on the loop as it passes through the lot. You will not need to pay an entry fee if you go during the off-season, but during camping season, you will have to pay to enter the park. It's worth it - the place is a gem. There are other trails at GW, but this FKT route is Orange Blaze only. Map:  https://exploreri.org/trailmaps/RIDEM-George-Washington-Mgnt-Area.pdf

Please read below for some really cool history about the trail and more details about the route.

The Australian Aborigines have a tradition, a rite of passage, where they live in the wilderness. This tradition is known as a Walkabout. In the early summer of 1965, a group of Australian sailors were in Rhode Island while they waited for their ship, the H.M.A.S. Perth, to be commissioned. During this time, about a month, they spent in the woods of the George Washington Management Area cutting the trails of what we know now as the Walkabout Trail. They gave this network of trails its name in honor of the Aborigine tradition. There are three loop trails here, all very well blazed. The hikes of choice here are the 2 mile blue blazed loop, the 6 mile red blazed loop, and the 8 mile orange blazed loop. All three of the loops begin at the Bowdish Reservoir beach in the George Washington Campground. Maps are available at the trailhead. There are also trail markers for the North South Trail that uses sections of the Walkabout. (An entry fee, currently $2.00, is being charged to get onto the property. The beach is at the third left after the entry gate). For this hike I opted to do the orange blazed loop. A good portion of this hike is through areas where there is rocky footing and in some spots it could be a little muddy. Be sure to wear proper footwear for this hike. Trekking poles or a hiking stick wouldn’t hurt either. The first section of the hike is blazed in all three colors and follows the Bowdish Reservoir as it winds through areas with mountain laurel and boulders. After crossing into Burrillville, soon you will approach the second body of water along this hike. This is Wilbur Pond, and it is in this area that the blue blazed loop turns to the right. Continuing to follow the orange blazes the trail then turns into the thickness of the forest. On most days if you stop for a moment to listen, you will here almost absolutely nothing. Along the way the 6 mile red blazed trail will veer off to the right and the orange trail will become slightly narrower and cross several dirt roads. You will pass through an impressive hemlock grove in this part as well. Soon the trail will join up with a red triangle blazed trail. This trail (and others ahead) are part of the Pulaski Park trail system. Be sure to follow the orange blazes and double check at each trail intersection or you may end up heading the wrong direction. As the trail starts to head east you will soon find yourself at Richardson Marsh. The western end of the marsh is a pond and the sweeping views from the earthen dam are quite impressive. This is the 5 mile mark and a good spot for a break and to look around for wildlife. Evidence of beaver activity is noticeable here. The trail then crosses a series of plank bridges (aptly named Richardson Bridge), slightly uphill to a trail intersection and then to the left. The remainder of the hike traverses through the property winding up and down small hills and areas of rocky footing. The red and blue trails eventually rejoin the orange trail. Toward the end there is a couple sections of trail built like old Roman roads where the logs are laid down over muddy areas. Approaching the campground, most times you will then start to smell campfires as the hike concludes. 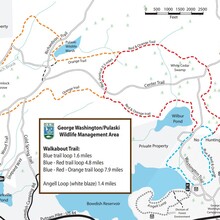 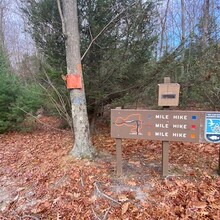 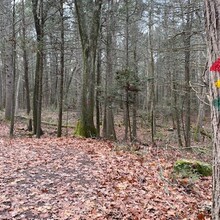 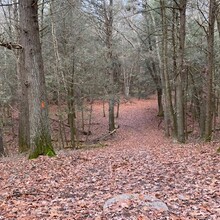 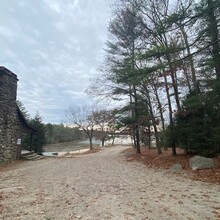