Overview: The full list of Wyoming 13ers has only been climbed a few times. The reason for this is a combination of long approaches, obscure routes, and much higher technical difficulty than most popular peakbagging lists. Climbers interested in this list should be experienced with wilderness backpacking in grizzly country, glacier travel, moraine travel, steep snow climbing, alpine rock climbing to 5.4, and practically every other aspect of semi-technical alpine travel. The route is open, provided you follow the rules outlined at the end, and reach the summits of all 36 peaks under your own power. Mileage and elevation gain are highly variable by strategy; suffice to say that the Wind River approaches are usually >20 miles one-way. While all of these peaks have been soloed, most climbers will belay at least some of the routes. Consult guidebooks, trip reports, or the stars for direction.

The Peaks: There are 35 "ranked" 13ers in Wyoming, plus one "soft-ranked" 13er, meaning it is unknown whether it has sufficient prominence, but it is usually climbed with the others anyway. 31 of these are in the northern Wind River Range; 1 is in the southern Winds; 1 is in the Tetons; 2 are in the Bighorns; 1 is in the Absarokas. There are two points worth noting: Spearhead Pinnacle has been sight-leveled to be higher than Forked Tongue, and thus only the former must be climbed for this list. Leveling on Twin Peaks has been inconclusive, so BOTH East and West summits must be reached to claim the high point. Thus, the final list of Wyoming 13ers which must be climbed to claim the FKT is the following, listed in order of elevation:

History: The first people to report finishing all 36 thirteeners were Sarah Meiser and Teresa Gergen, who finished together on Black Tooth in 2015 after climbing the list over many years. Matt Lemke became the 3rd reported finisher, climbing his last peak (Bow) in 2020, also undertaking the list over multiple years. Eli Boardman became the first known person to finish the list in a single season (the first dedicated WY 13er FKT), climbing all the peaks in multiple trips during the summer of 2020 (while also taking courses as a full-time college student), including soloing all of the hardest peaks, some with rappels on descent. Eric Gilbertson is currently (August 6, 2020) on track to also finish the list this summer, time/record still pending of course.

1. No cheating, obviously. Touch the highest point of each peak--if you turn around a few feet short, you have to go back. The peaks can be climbed in any order, in 1 or more trips, but the clock never stops and you have to touch all 37 summits (35 ranked + 1 soft-ranked + ambiguity of East/West Twin).

2. You must travel on your own feet above the trailheads (no horse-riding/helicopters/etc.). Most of the trailheads are well-defined, but in general you may drive as far as you want so long as you drive only on legal, established roads (the Phelps Mountain Road route on Francs IS permitted for this FKT). The peaks are remote anyway, so follow the spirit of "no cheating" and you'll be fine.

3. Muscle-powered support is fine (unless trying for "unsupported" of course). Whether that means support by humans, horsepackers, goats, etc., if it's legal, it's allowed so long as you still are hiking all the way under your own power. Bonus points for carrying all your own gear.

4. Climb in good style. Be a good wilderness traveler, don't endanger others, and follow all applicable laws/regulations. Common sense and good ethics apply as always: if it isn't listed here, assume you should err on the side of whatever you would consider "good style." In particular, respect the history and obscure nature of many of these peaks, and don't engage in excessive beta-spew. No one needs a picture of every hold.

Conclusion: Discussing it with another finisher, we agree that the Wyoming 13ers is probably the best elevation-based peakbagging list with <100 summits in the Lower 48. Many of these peaks have been climbed only a few dozen times and have original registers dating to the 1930s. Expect devious routes, fickle conditions, unexpected weather, and overall superb, memorable adventuring in some of the Rockies' wildest ranges. To paraphrase Whymper, climb the WY 13ers if you will, but look well to each step. 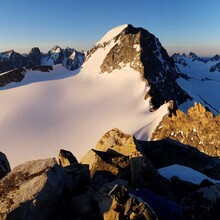 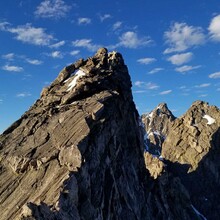 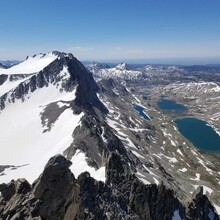 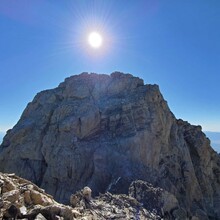 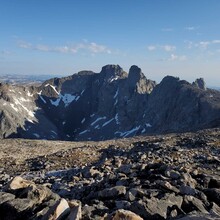 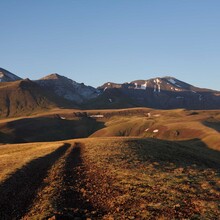 Trip report with more photos and description of linkups:

Sean O'Rourke is currently on track to set a new FKT for the Wyoming 13ers. He is doing it solo and completely self-supported including driving.
https://fastestknowntime.com/athlete/sean-orourke