The Wild Oak Trail is a 27 mile loop featuring big climbs and runnable trail. Elevations vary significantly, from a low of 1,600 feet at the trailhead at North River Gap to a high point of 4,351 feet on Little Bald Knob, and boasts nearly 8000 feet of ascent. Portions of the existing trail were constructed by the Civilian Conservation Corps in the 1930s to provide access for forest fire control. These trails were combined as the Wild Oak Trail, which was designated a National Recreation Trail by the Secretary of Agriculture in 1979. In addition to the trailhead at North River Gap, there are two other road crossings on the loop: at FDR 96 and Camp Todd, each about 10 miles from North River Gap (in opposite directions). In the summer of 2016, the trail was slightly rerouted and, as a result, shortened. See the Gaia screenshot below for more information. FKTs are accepted for both routes, although the new route is probably faster. Time starts and stops at the trailhead, so if you start somewhere "on" the loop, you have to do the portion to and from the trailhead as a short out and back.

The Wild Oak Trail (TWOT) has been used as a race course by the Virginia Happy Trails Running Club (VHTRC) for many years, a race comprised of running one or four laps of the Wild Oak Trail.  So far, 1-lap FKTs have been set in these races, as below. 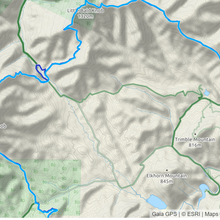 Going to give this a solo/unsupported attempt tomorrow. My time will be NO WHERE near the times during the twot 100 races..... I will be thrilled with anything under 8 hours.  Updates will be on my Instagram, if I have service. I will also post a Strava Beacon link on my Instagram if possible. @ultra.outlook

Ended up getting nervous about the time and took one of the roads out. 21 miles and 5300 feet of elevation. Great day, but didn't complete the loop.

Taking a solo but supported (going to get met by the car with resupply partway through) attempt at this tomorrow! https://www.strava.com/athletes/26456310

Hello! I am heading out tomorrow to run the The Wild Oak Trail (TWOT) loop and see what I can do! I’ll be running the loop counter clockwise, in a supported fashion. There is a strava segment for this loop (https://www.strava.com/segments/22043935?filter=overall)

It looks like the current fastest time per strava is Kelly MacDonald with 5:39:16 elapsed time and 5:38:57  as running time — not sure which she’d say was her time.

I’m not 100%, but I believe both were supported efforts.

Thanks to Shannon for getting the records started over here officially! I’ll follow up tomorrow with my day.

Happy Friday! Tomorrow morning I'm going to make a solo/unsupported attempt on the TWOT loop, going CCW, starting at the trailhead of FR-95. Going to be tracking with a Coros GPS watch and perhaps a SPOT tracker (for the two fans at home).

This time last year I ventured out on TWOT for the first time with my new pup, Mistie (on a leash..jeez) - surprising myself with how much FUN I had, beauty was witnessed and with what my body is capable of conquering. My plan is for the two of us to get back out there at 7a tomorrow (and this go-around, with many more miles under my belt), enjoy the new blooms of Spring, maybe find some mushrooms, soak in the forest's lushness, and beat my time of 5:47. Unsupported, and lots of homemade snacks+hydration in tow - I'm excited for a yummy day on the trails!

Lovely day and great (+ hard! of course haha) time was had! Here’s how it went down: https://strava.app.link/vgeCK46IUfb 5:26:33 total time, unsupported