The Grampians Peaks Trail is Victoria’s newest multi-day hiking trail that officially opened on the 13th November 2021. The trail is Victoria’s longest new hiking trail (160km) since the construction of the Great Ocean Walk (100km) was opened in January 2006. The Grampians Peaks Trail is designed as a 13 day / 12 night end to end trail experience that spans the entire length of the National Park.

Note there is a shorter (36km) loop trail of the same name (which overlaps this route as well):  https://fastestknowntime.com/route/grampians-peaks-trail-vic-australia 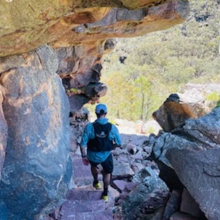 just wanted to say awesome running and being the 1st to do the full GPT and getting the FKT time.

would like to let you know that I’m running the GPT tomorrow (Jan 14th 22) in the same direction as yourself. I’m going to run it solo and unsupported as well, Hoping to have a great run and fingers crossed the weather is favourable

all going well, hoping to finish on my 50th Birthday ?

Great effort! Just letting you know I will be attempting this supported on Friday 4th or Saturday 5th February, subject to it not being heatwave conditions.

I am waiting to see the official map which I will receive in a couple of days, but I'm interested in your opinion as to whether the detours mentioned in the route description on the Parks Vic website (Gar/Mt Difficult, Chatauqua Peak and Signal Peak) could/should be included. Were there indications out on the course that GPT walkers should go up and down those mountains? I've tried to look at some other routes on this site and it seems some include out and back diversions that aren't necessary to do the trail end-to-end. Does the official map give any indication?

My estimate is that doing Gar, Chatauqua and Signal Peak would add 3km and 134m to the route. Whether I do them or not will depend on how they look on the map and the opinions of others here - if we reckon they are inconsequential enough then I will skip them and just do the straight point-to-point.

Otherwise, I might skip Gar but do the other two as they are pretty short.

Rurik Simon and Simon Duke have uploaded a Supported Group/Team time of 27h06m to Facebook/Strava.

Correction: the 27h06m is from Strava which was their "moving time". Total elapsed time was 31h33m.

Cheers Paul and g'day to all on this thread who have gone before - what a journey!

Have submitted our run for verification yesterday but trip report below which is hopefully helpful info for others who will be inspired to give it a go - a special route in a beautiful place!

At 7:03am on the 12 March Rurik Symon and I (Simon Duke) set out from Mt Zero campground at the Grampians Peaks Trail northern trailhead to see if it was possible to...

1. Complete the trail in one push (otherwise we would try split it in half) or

2. Maybe give the FKT a nudge, inspired by Julian Bowring and Julie Brock.

Little did we know just how ‘beautifully brutal’ it would be. Everything felt great for the first 50kms between the trailhead and Halls Gap with some flowy, well groomed and very scenic trail and a good ascent completed. Some hints of potential cramps on the way down into Halls Gap but nothing that escalated. Had seen barely anyone and then Halls Gap and Visitor Centre buzzing with tourists and many people enjoying the Pinnacles. Day was definitely warming up by now with heat from above and reflected heat from below off the rocks but legs strong and spirits high.

Mt Rosea - tick, second major peak done. Got into Borough Huts at the base of Redman Bluff climb around 7pm, which enabled a good chunk of the ascent to happen in daylight. Getting through from Borough Huts to Duwul on Redman Bluff was a roughly a 3hr project due to technical nature of terrain on the ridge but also the scale of the mountain. The final push for Mt William summit from Duwul was surprisingly on bitumen (but was also welcome at that point). Not too long after we also passed by Durd Durd summit rock cairn.

Was surprised to hear and see a massive rave going on below - not what we expected but all good for adding to the uniqueness of the experience. Speaking of unique, the trail from where it crosses Jimmy Creek Rd through to Yarrum Campsite has to be experienced to be believed. 3 words - actually - still speechless. Easily the worst section of trail for about 10km - maybe the scenery is amazing but we were doing it in the dark just focusing on not rolling ankles or tumbling down the side of the mountain....I'm not sure even the kangaroos would choose to follow the trail in this part.

About 5:30am we reached Yarrum Gap Rd where we were expecting to connect with Kieran and Lauren (friends and support crew) again after around 6hrs self supported but a lack of phone reception and our delirious state meant we missed seeing them even though they were parked only 100m from where the trail crosses the road. We flagged down some soda water from an unsuspecting driver and pushed on - reconnecting with the support crew at Cassidys Gap Rd.

The day was growing warm again and had the last kms to complete which still involves a climb up Signal Peak, Mt Abrupt and Mt Sturgeon - a nice sting the tail with so many steps up and down.

Rough estimates from the memories of 2 sleep deprived humans

The 'rules' we applied - As per Julian’s route to establish the FKT and consistent with Julie's recent female supported FKT we starting from the North and travelled South all the way into the Dunkeld Visitor Centre where we stopped the clock. We made sure we went into Halls Gap township and Visitor Centre (thank you Stephen Redfern for clarifying this for us), and followed the yellow markers along the trail which meant bypassing some campsites as well as not detouring up some out and back summit/lookout tracks (the Picaninny, Mt William, Mt Rosea, Mt Difficult).

Tips - check with visitor centre about water tanks and road closures and if wet it would have been truly hectic. So many sections require good foot placement on rocks or steps with a fair bit of camber and random angles at times. Definitely need GPX route. In southern half trail is still possible to follow 'intuitively' for most of it but yellow markers are few. The paper maps are literally paper (so turn to mush with sweat or water) so have something waterproof to put them in if you're relying on them.

Massive thanks and kudos to Julian and Julie who went before us and also to Kieran, Lauren and Isla for being an amazing support crew - feeding, encouraging and sharing some very memorable kms with us. An adventurous journey that any ultra trail runner should consider doing at least once in their lifetime!