Visits the 10 trig points [UK Ordnance survey marker used for surveying and mapping] around Bath. No specified route between the trigs! Distance about 24 miles, with 1000m of ascent. Terrain ranges from road to deep mud.

The  points can be visited in any order, starting and finishing at any point (usually a suitable pub!), and the route can be completed clockwise or anti-clockwise. It has been usual for the Bath Bats running group to complete the route as close as possible to the summer solstice for a daylight run, or the winter solstice when it is done in full darkness (and deep mud!). However, for FKT purposes we do not differentiate between winter and summer; go when conditions are fast! The route was designed as a training run by Dan Booth, a wild runner who died very suddenly in 2011 at just 42 years old. It is run in his memory.

Widcombe 767638 (NB this trig point is no longer accessible!)

Editor's note: Runners attempting this FKT are encouraged to take a photo at each trig point to prove you were there (sometimes GPS data doesn't show where you were to enough accuracy). Englishcombe Knoll (178m) is not accessible on a public right of way, and nor is it on access land. In light of this, it is acceptable to remain on the footpaths that go round the trig point (see image). This results in a slightly longer route than tagging the trig. All other trig points must be visited, except Widcombe which is no longer accessible. 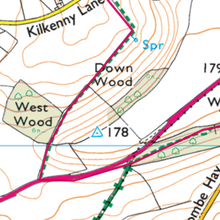 Attempted this on 20-11-20 and came just short with 3:32:50. But hey, what an amazing route! Despite horrible conditions, it's a little too soon for the Winter attempt. I'll be back :)

You should probably make a video about your attempt and stick it up on youtube.

Just done a double Dan Booth on 27th February. I added a few more miles as I wanted to do a double marathon, so managed 53 miles in about 12 hours and 20 mins. I think this is an FKT for a double? Supported a long the way by amazing Bath Bats.

Going to attempt the Dan Booth this weekend (Saturday 5th March 2022), goal is to go for the FKT but failing that to just have a good run!