The Great South West Walk is a 250 kilometre walking track, established in 1981, and located predominately in the Barwon South West region of Victoria, Australia. Much of the course of the track passes through the Lower Glenelg National Park, the Cobboboonee National Park, the Discovery Bay Coastal Park, the Mount Richmond National Park and the Cape Nelson State Park. The Great South West Walk track, which notionally begins and ends at the Visitor Information Centre in Portland, traverses forest, river gorge, high cliff tops and bays. It was designed as a long distance walking track, with the option for short and day walks. It is accessed from roads in and near the towns of Portland and Nelson. The walk’s difficulty is rated as moderate, and consists of fifteen sections of varying lengths. The walk contains 14 camp sites along the track; all supplied with fresh water, cleared tent sites and bush toilets.

Phil Ackand (8/20/2015): I've been searching for information, with no luck, on the FKT for Victoria's Great South West Walk loop from Portland.
I'm not under the impression that I'll be able to match the time but it would be handy to know as a reference and benchmark for any future attempts. 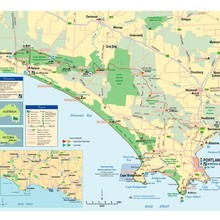 This route on the old FKT site
http://fastestknowntime.proboards.com/thread/1144/great-south-west-walk-victoria

I commenced the run at 0700 on Friday 27 December 2019 in Portland. I was required to take a route diversion for 14kms from Cobboboonee camp site along the forest roads due to a fire. This was approx. the same amount of kms as if I had gone along the track.

My run was supported by Simone Backhausen and Simone Brick.

I have submitted the FKT for approval.

The links for the run are here:

The description of the run can be found at www.treadlightlyforchange.org.

I am very happy to talk and give support to anybody who would like information about completing this FKT.

Going to try FKT for GSWW on the 27th November with Karen Robinson in supported female category together.

I'm hoping to create a Female Unsupported FKT for the Great South West Walk this coming weekend - starting out on Saturday 8 May. Depending on how I feel when I get to Nelson (and how good the hot chips smell!), it may revert to Self Supported :)

Going to try set a somewhat competitive male Unsupported FKT for the Great South West Walk, starting tomorrow 14 April 2022. Ideally will get it done in under 4 days if all goes to plan!